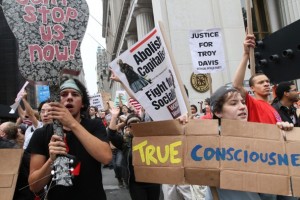 It’s Monday morning.  I am working from home, and I just have to get this off my chest before I actually start working.  This has been burning all weekend long in my brain…  I was going to wait to post this until later in the week, but just couldn’t  Had to get published now…

I have the interesting privilege of being close to the Occupy Wall Street Protests.  Not in the way you would think, however.  I did not go down to see them, I did not protest, however, I spoke to people who had to get through them to get to work, to Brooklyn, etc.  It is just a mess.  However, this morning, on an undisclosed news station, I watched interview clips of the protesters…  It makes me sad to watch these people protest private industry.  I know I am generalizing, but some of the comments were saddening.   One young man said he was protesting Capitalism.  More specifically, he was hoping for the fall of Capitalism.  My heart immediately sank.  When asked what system he would want to see replace capitalism, he just looked into the camera like a dumb ass, without anything to say.  Seriously.  He just stood there looking like the cat had his tongue.  All talk and no backup plan.  That is how I view these protests.  No one has a real plan.  Another woman was asked if the CEO of one of the banks came down to Wall Street and offered her a job today, would she take it?  She said “no.”  What?  I suppose if you are getting free money from the government for your 99 weeks, welfare, hand outs, etc, and you are content with it, you would say, no.  I don’t know anyone that is content with it, but I fear our weakened economy, coupled with a growing sentiment of distributed wealth, without having to work for it is starting to take it’s toll on people.  They are being quietly recruited into the socialistic / communist mentality of equal distribution without care for where the compensation comes from whether new minted bills just because or someone else’s hard labor, blue or white collar.

I started to get angry…  I started to get angry because I just saw a mob of people denounce the very system that my grandfathers fought for during World War II, friends fathers fought for during the Korean war, Vietnam, and friends fight for in our existing wars.  Some of them, (one a very close friend of mine) who were deployed during the Gulf War are today paying with financial issues, not of his own making.  My grandfathers would be rolling over in their graves if they knew.  One was a coal miner and the other a business owner prior to and after the war.  I cannot fathom what they might think today.  What I heard was personal.  It was personal because I grew up with the threat of communist annihilation, watching movies about climbing under your desk to avoid the result of a nuclear detonation.  Today, I know that, had that happened, nothing would have mattered.  However, today my company also does business in Russia, China, etc.  We sell software to businesses in those countries.  We also have two offices in Russia, employing people.  My views of a flatter world are evident today, but one thing stands tall; and that is my belief in our Republic, and Capitalistic views of a “free market society.”

I wonder (and I really do ponder this) what goes through the heads of these people protesting profits of private enterprise.  These are the people that actually create jobs.  Do they not realize that?  Did someone never tell them that “businesses are in business to make money.”  Thank you to my 6th Grade social studies teacher Mr. Jim Rodda for beating that into my brain.  No one starts a business to lose money or give away all the profits.  Do they?  I mean if that is the case, I need to start thinking differently (sarcasm implied).

Is this how today’s youth thinks?  Is this the future of our country?  Is there going to be a revolution or revolt by a growing number of people who prefer distribution of wealth over actually working hard for a living?  Please do tell me because, I don’t want to get caught in the middle.  I may already be.  I know that this may sound extreme, but it is to also illustrate the point that this may be a real looming threat.  Is threat the right word?  I think it is.  The protests now being called: Occupy Wall Street, are growing beyond Wall Street.  Protests are being encouraged all over the country by those that are concerned with, well, whatever it is they want to protest about.  I still am not sure, but I know very quickly, it is turning into a ‘movement.’  What that means I do not know.  But here are a couple of resources for you to review… Down with capitalism, they say…

Sigh.  What will be next?  Why do they think the government can create sustainable jobs?  It is not sustainable.  As soon as the private sector cannot afford to pay the tax the revenue is gone.  Businesses fail.  It is a fact of life, just like death.  Most businesses fail in their first five years.  Failed business = no tax.  Do they not get if they “take down the rich” there is fewer taxes to be collected?  I know what you are going to say.  But if you have the money you can find the tax loop holes.  Let me give those skeptics a little hint.  There are always going to be tax loop holes, and there are always going to be very fat wallets on BOTH sides of the political spectrum that will be able to find those loop holes.  Stop being so naive you “middle class socialist brats.” (Thank you Oingo Boingo), see below video).  No tax = fewer government jobs.  Why complain you have government guaranteed student loans?  You chose to go that route and create that debt.  Did you not?  Choice equals consequence.  I am sure the argument will be, “but no one knew this would happen.”  Let me shed some light on this for you.  Bill Clinton and George W. Bush knew this was going to happen.  Bill Clinton deregulated everything, and George W. Bush had to start bailing out the banks because of Clinton’s decision to let everyone who could not afford a home buy a home.  Deregulation and loose purse strings made it easier for the money to flow in the private sector.  Please don’t argue this point with me, just look at the idiots that bought homes that were double or triple the mortgage payment they could afford… Just look at the facts please.  And don’t blame the mortgage companies…   The deregulation just made it easier to approve loans.  Oh, and the banks that are being protested bought those shitty loans that were made to ensure that you could continue to own it… Again, sigh… It is a very cyclical issue, and the protests should be protesting those that caused the issue… Hmmm…  I guess I am ranting now, but the point is the same, the Occupy Wall Street protests are happening with no real goal or understanding of the issue at hand.  They are just protesting for money.  Makes no sense to me.  Start a business, do some thing, just don’t be part of the problem, be part of the solution.