The EBT Scare, Panic, and the Lesson 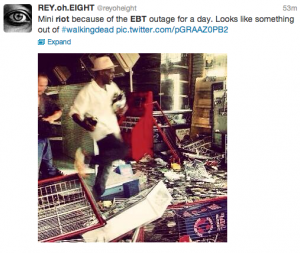 Over the weekend you no doubt heard about the EBT outage that bright the system to a halt.  If you don’t know what EBT is, it means “Electronic Benefits Transfer” and is the electronic version of the “Food Stamp Program.”  So, this means that  instead of receiving paper food stamps and paper checks, you are issued a debit card called the EBT Card to purchase food products and access cash benefits by your state government.

All states have systems that use magnetic stripe cards and “on-line” authorization of transactions. When paying for groceries, the customer’s card is run through an electronic reader or a point of sale terminal (POS), and the recipient enters the secret PIN to access the food stamp account. Then, electronically, the processor verifies the PIN and the account balance, and sends an authorization or denial back to the retailer. The recipient’s account is then debited for the amount of the purchase, and the retailer’s account is credited. No cash money changes hands. Payment is made to the retailer through an ACH settlement process at the end of the business day. Most states’ online EBT systems are interoperable through the Quest network, which is sponsored by the Electronic Benefits and Services Council (formerly the EBT Council) of NACHA.

NACHA is the National Automated Clearing House Association, who manages the development, administration, and governance of the ACH Network, the backbone for the electronic movement of money and data in the United States. It is funded by the financial institutions it governs. The ACH Network serves as a network for direct consumer, business, and government payments, and annually facilitates billions of payments such as Direct Deposit and Direct Payment. Utilized by all types of financial institutions, the ACH Network is governed by the NACHA Operating Rules, a set of rules that guide risk management and create certainty for all participants.

So, in short the Federal government provides the network for states (and other commercial institutions) to provide for, monitor, transfer, the facilitation of money to and from consumers electronically.  As we saw this weekend a small portion of that system failed in a big way, leaving many government benefit recipients without funds to purchase food for themselves and their families.

Now who was affected?  Food stamp recipients in 17 states of the United states were affected.  More specifically those who rely on WIC programs and SNAP programs were affected.  Arguably a small portion of the system, yet, a small portion of 17 of the 50 states.  The ratio, if you cannot do it in your head is 34% of the states in our country.  And to be honest, I have been scouring the Internet for how many EBT recipients have been affected by the glitch, maintenance, or whatever you want to call it, but I cannot find a number to correlate what a valid number might be.

However, panic very quickly started to set in.  In USA Today a statement was printed stating “some grocery store cashiers had been speculating that the federal government’s shutdown caused the problem.” The article can be found here:  http://goo.gl/rcdvjw.  And word like this quickly spread across the twittersphere, blogsphere, and across media in general until the “real” (some sarcasm implied here as I wear a thin tin foil hat) reason was revealed.  Some of the statements across the twittersphere, and there were hundreds/thousands of them, were making statements like this:

My point to this, though is not to illustrate the political rhetoric.  It is to illustrate the fact that it only took a few hours to put 17 states of EBT Food stamp recipients into a mild frenzy or panic, however you would like to define it.  It tells me that these people do not keep more food in the house than what they shop for when they go to the grocery store.  Meaning, that they do not keep even a 72 hour supply of food for themselves or their families stored in rotation in the event something goes wrong, such as the EBT outage or other natural or man made disaster.  And make no mistake, the EBT system going down is a man made disaster as would be the ACH system going down mentioned earlier in this post.

We could argue that these people don’t have the money to keep 72 hours worth of food in their homes for a disaster, but I humbly disagree.  While very low in nutritional value, one can spend about 30 – 40 dollars and feed a family of four for three days with ramen noodles, frozen vegetables, and eggs.  Eggs provide protein, frozen vegetables provide additional vitamins and minerals, and the ramen provide both water and carbohydrates.  That 30 – 40 dollars can feed the family three times a day for three days, and keep their stomaches full.  Again, trying not to be political, but Skip LaCombe and Doc Thompson on The Blaze Radio this morning were talking about how an EBT recipient bought nothing but soda in their cart.  Nothing but soda?  How is this essential under EBT for Food Stamps or SNAP. One person argued it was cheaper than water.  Ugh.  (I am veering off to the political, back on track).

Panic…  Now, I am going to change my vernacular a little bit, and represent this a bit differently… The (use your own word here:  zombies, sheep, lambs, locusts, etc.), zombies started to panic.  They started to get apprehensive.  They started to think they were slighted by the system that was feeding them.  I truly feel for those that are utilizing the system as a stepping stone to fixing their situation.  But for those lifetime zombies that have no intention of moving off the system that those that are actually working are helping to feed, I have very little sympathy.

Yet, sympathy or not, the situation could have been worse…  What if it was a government funding issue?  What if the government could not afford to keep the money rolling to the cards so that those that use the system could not purchase food to feed their families.  Today is Monday, Columbus Day, October 14th, 2013.  It is almost 72 hours from the date and time the system went down.  What would happen after 72 hours?  What would be happening after a week, two weeks, etc.  Good question.  I have friends and family that are contractors to the government out of work not receiving their paychecks because they do not have work.  I have family that works for the federal government in LEO positions, that are mandated to work without pay.  It’s been 14 days, and they have bills to pay, food to buy, gasoline to purchase, etc.  How does that happen?  Is the government creating zombies of their own worker bees?

I am going out on a limb and noting this financial glitch was a warning shot, intentional or not.  It says that “plastic card based currency” is very volatile, and that no matter what the cash is worth, diluted because too much has been printed or because it is not backed by anything or not, cash is still king until it is used up.  I also wrote about building your own local or group currency as an alternative to the current economic system or other issue, like our EBT glitch takes place.  If you like you can read about it here.

What can one do about this?  It may sound righteous or self righteous, but try your best not to become part of the system.  If you find yourself having to take part in the system, try to keep two weeks, at the very least, food storage and water for you and your family.  I implore you to keep that as a minimum.  If you budget, you can do it.  I know from experience… But that is fodder for another blog post.

In conclusion, the zombies will panic more quickly than 72 hours from an electronic disaster when you take away their money or ability to spend.  To hypothesize, it doesn’t matter if it is the EBT system or the whole ACH system is locked down due to a glitch or being shut down… We now know it can and may happen in the future again.  If it does, there is no guarantee the system will be back up same day, and your money may be tied up in a damaged system for days, weeks, months, or longer, especially if backups do not work as they should during a restoration phase.  The lesson:

As always, thanks for reading!