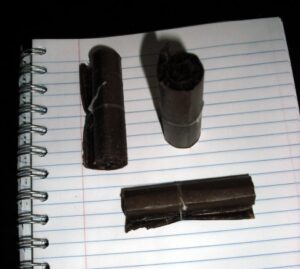 UPDATE 2021: I have not made these fire starters in years.  This is not to say they were not effective, they certainly were.  They were an amazing aid when we went camping and practiced fire-starting skills.  They acted as a great accelerant, especially if all you had was a bic lighter with you.

I have since standardized on several different types of fire-starting accelerants in my bug out bag, get home bag, and more…

Every time I go camping I make sure I stop at the outdoor store and pick up some quick start fire sticks.  Generally, they are not expensive and help to make starting the fire a breeze.  But what if there were no store.  What if it were a situation where my survival depends upon creating heat, and I was in the middle of nowhere with no shelter.  What if it were raining and my tinder was wet?  Good questions I have been asking myself.  Short of learning primitive fire making methods (which will be included in a survival class I am taking at Practical Primitive in August 2009), I wanted to find a way to make an inexpensive alternative that is lightweight, easy to make, and will do the trick in a pinch with a ferro rod, match, or lighter. 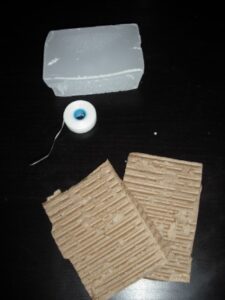 So, my research led me to a couple of sites online that described making your own fire sticks.  The basic ingredients that I chose to use were; string (I used dental floss), corrugated cardboard with one side of it peeled off, and a bar of candle wax I bought from a craft store nearby.

First, I cut a couple dozen pieces of cardboard, all about the same size.  Then I rolled them into cylinders with the skin side out and the wavey corrugated side on the inside.  I tied each one of them in the center with the dental floss, which is already wax coated.  Note: in hindsight, I would have used regular string because when we dip these into the melted wax, the wax on the dental floss loosens and gives the fire stick a little play.

I then melted my wax in a double burner (water in one pot and wax in a pot submerged in the water) to safely melt the wax without burning or boiling it in the pot.  I then used my Leatherman multi-tool to dip each cylinder/fire stick in the wax until the exterior and the interior was coated, let the excess drip off, and placed it on a sheet of aluminum fol to cool.   I did this until I was finished and below, see the end result.

I tested a few, and they burned hot for about five or six minutes each, which should be long enough to dry out some tinder and get a small fire going.  I plan on making more of these and using them when camping, hiking, and keeping in my gear bags.  I plan on making different sizes and densities to experiment with what size might be the best for me to use when in the field.

It only took about an hour to make the bag of them you see below, and by the time I was done, felt like I had accomplished a little more in my quest to be prepared. 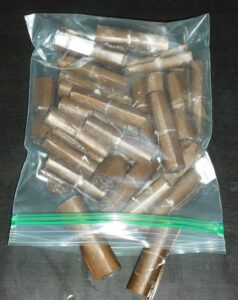 Here are a couple of the resources that I found.  You will be able to see clearly where I got my idea from: