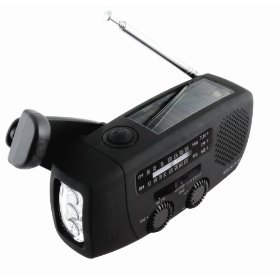 UPDATE 2021:  Over the years, I have found emergency radios to be essential little tools whether you need them in an emergency or not.  I used one during Hurricane Sandy to stay informed about the surrounding metropolitan area.  In addition, prior to those little blue tooth battery-powered speakers, I used to take one of these emergency radios camping because I didn’t need to worry about batteries (typically) due to the small solar panel on top.

Since then, I have also added baofengs, short wave radios, etc as well for communications and opsec.

So, this week I realized I didn’t have a radio in my Bug-Out-Bag, or one that I could take camping with me.  I set out to find something that could be used in an emergency situation, as well as every day if I wanted to.  What I found was a small handheld, solar rechargeable, crank chargeable radio with weather band as well as AM/FM.  What I found when it arrived was something better than I had expected.    It was smaller than I had expected, and literally almost fits in the palm of my hand, has surprisingly good reception with the small antenna, and the speaker is much better than I had expected.  The exterior top has a flashlight switch and a solar cell on it to recharge the battery.  If you are in a low-light situation, you can crank the handle to recharge the batteries.  I find this to be an excellent little radio/survival device.

ETON is the manufacturer, however, I had not heard of them before.  I decided to purchase this anyway and found out that the American Red Cross endorses this radio as well and sells it online too.

Basically, I purchased this to throw in my BoB or to throw in my car for camping, hiking, etc.  It seems rugged, and well constructed for the $30.00 cost.  The battery seems to last, although i really have not put it through its paces yet, or have had to charge it via the solar cell.  It does have a USB port to charge it, so I can charge it with my iPod charger in the car, as well if needed.  Overall, I think this is a good purchase because of its portability and quality build.

UPDATE 2021: Pitfalls… The major pitfall I have found with these radios, is the rechargeable batteries, are typically average at best, and when they eventually die, you may not want to toss your radio, but replace them.  It was difficult to find the right batteries to replace in the radios.  In one case I had a battery store go out of business before they could get me the proper replacements.

Because of the battery replacement issue, I have on more than one occasion had to toss a set of these radios, and replace them.  There are various brands out there, and they all seem to come from China… I say replace the units as you need to, they’re not overly expensive or start building your own power plant to power your small devices.  A post on this coming up soon