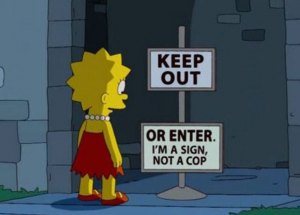 This is what hundreds, perhaps thousands, of people who own property in the New York Catskill mountain area were told in 2011. Local residents as well as state police turned legal property owners away from access to their land in the fall of that year.

But allow me to digress for a moment before the details…

A great many preppers own property elsewhere from their primary residence as their “bug out” location. The land may be anything from a few undeveloped acres they would plan to setup a camper on to a full working ranch or farm and every variation in between. Many others don’t have land per se but have an arrangement with family or friends to come to their location (far from their own) in the event of an emergency. And still others may simply have a plan to get to a remote area where they believe simple lodging or perhaps even squatting (no judgments)  can be obtained in an emergency.

Whatever your evacuation plans are there is a cold hard reality that many preppers are not aware of, yet – in an emergency you may NOT be welcomed into the area even onto your own property!

Returning to my opening comments, this type of rejection greeted Catskill property owners immediately following the passage of Hurricane Irene in late August of 2011. The storm had followed the typical coastal track up from Florida and as most hurricanes and tropical storms that come as far North as the Northeastern states was expected to wreck havoc on the coastal areas of New Jersey and New York. But at the last moments Irene turned hard inland to the West and tracked much further North into the upper reaches of New York State and into rural Connecticut – areas that never typically see tropical storm force winds and rains! The result was flooding on truly a Biblical scale. Streams only knee deep during even the spring rains (I know, I’ve fished them for years) now went 30-40+ feet over their banks. Buildings near these streams and rivers completely flooded over their roofs. Many washed away altogether.

In the wake of this devastation it was nature for people who owned property in the area to want to survey the damage and start the cleanup/rebuilding process immediately.

They were not allowed in!

Local sheriffs and state police blocked the roads into these areas and only full-time residence (as determined by the address on their driver’s license) were allowed in. Officials accept no other documentation – property title, property tax bill etc – as evidence to be allowed in. On message forums and in chat rooms for days arguments between local residents and non-full-time property owners raged day and night. Locals used some very heated words to describe people from outside the area (mainly from NYC and Long Island) who owned property there but didn’t live year-round. It was startling how much venom was being exchanged.

This went on for near 2 weeks after the passing of the storm. Finally the road blocks were lifted and general passage restored.

While I accept the need to keep out looters, souvenir hunters, and disaster “gawkers”  preventing access to property by their legal owners (and representatives) is beyond extreme in my opinion.

I bring this up as a harsh reality to preppers:

You may not physically be able to get to your “bug out” location in the event of an emergency. Local forces, official  and otherwise, may be employed to keep non-locals out no matter what ownership you have to property in the area. And there may be the force of law enforcement behind them as well.

Even for preppers who routinely visit their secondary residences or live there periodically throughout the year you are still considered an outsider/non-resident to those who live there all the time.

Add in the possible secondary consequences of some kinds of extreme emergencies (example: A plague or chemical/nuclear contamination) and smaller communities may close their borders on their own.

This may result in anything from having to travel much further out of your way to get to your location (go around closed off areas) to having to get in on foot or other means to not being able to get to your secondary location at all in the worst case.

The only solutions I can see would be 1) have multiple “bug out” locations which is largely impractical to afford for most preppers even when resources are pooled, or, 2) Try to leave as quickly as possible after an emergency (before the situation gets so dire is even better) before people and officials can organize and react.

One last thought: Don’t fall victim to thinking this is a uniquely New York/Northeast/liberal mindset. Such a “quarantine” either official or self-imposed can happen anywhere given the right circumstances. When people are afraid anything is possible.