Thoughts on Budget Guns for Survival, Part One 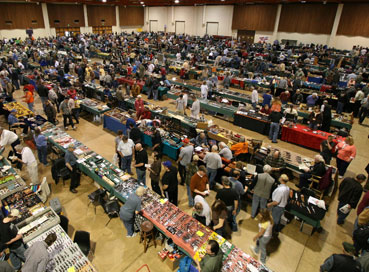 Recently, I have been making it a point to frequent gun shows in my home state.  I’m looking fora new carbine, and thought it might be a good way to get a broader view of what is out there, and what I might want.   I have a very good idea of what I want, for various reasons I won’t get into now, however, as I looked around in the two HUGE rooms of guns, knives, ammunition, memorabilia, body armor, survival gear, antique weapons, customer gear manufacturers, and much more.

Walking around I saw many of the same gun on table after table in various condition and price.  That got me thinking.  One of the first things that came to mind, that I already knew, and as many experienced gun owners know, is that a gun does not have to be expensive to be effective for it’s varied uses.  While I may always be drawn like a magnet to that $1,500 tricked out carbine, not everyone can afford it, nor may it be the right choice for you, or me…  Further, while the $1,500 carbine may be fun to shoot, you no not NEED one to protect yourself and your family with.  There are plenty of alternatives that you can acquire along the way that are just as good or better for a fraction of the cost.

Backtracking a little bit, I know many readers are gun enthusiasts, Second Amendment supporters, worried about protecting themselves and their families.  However, I also know there are a cross section of readers, since this blog is primarily about suburban and urban survivalism that do not own nor may not believe in or own a firearm to hunt, protect, target shoot, etc.  In NYC alone, it can take a year just to get an application approved.  Then you have to wait to buy the gun.  Then you are not allowed wo purchase another one for several months.  You should NOT neglect firearms or firearms training as part of your preparedness planning for you or your family.  A gun, firearm, weapon, whatever you want to call it is a tool to perform a certain job just like a shovel, automobile, can opener, etc.  They have multiple uses in many different situations.  Hunting, protection, sport; Alan Korwin wrote a short post on the multiple “noble” uses for firearms here.  I happen to agree with ALL of them.  Acquaint yourself with the list, and see what you think.  The list of uses should answer your question of why firearm ownership at all… When thinking about this in survival terms it becomes a bit more primal, in that during a SHTF situation, those without resources (food, water, medicine, illegal drugs, shelter, heat, etc.) will come after those who have them.  If the SHTF is a prolonged situation without additional support from external resources, or depending on how well distributed those emergency resources are, they may still come after you if they find out you are flush with resources.  This must be considered.  I want to say it is your responsibility to yourself and your family.

That said, do not wait until there has been some emergency situation, SHTF, or WROL situation to try and procure a firearm.  It simply will be too late.  If you are lucky enough to try acquire one in an emergency situation then you will probably have paid through the nose for it and the ammunition for it with money or other resources.  Not a good use of those resources to say the least.  I will reiterate, those who have not prepared for an emergency of any kind will take from those who have in a survival situation.

So, pre-SHTF acquisition of a firearm or firearms is really the way to go.  Do not wait until or after an event to obtain tem as there may be imposed new gun regulations that may make it harder to “legally” get your hands on the gun that could protect the very fabric of your family.

People, inherently are unpredictable when their life changes drastically in an unexpected fashion.  Just like the phrase “money changes everything,” so does disaster.  Do people pull together and bond to help each other.  Sure they do.  Look at 9/11, Haiti, Japan, etc. However, what do we not see.  Look at Katrina, and how much of the crime was suppressed, and you did not hear about it until MUCH later… Granted, firearms were seized by the government, which in my humble opinion, made the criminal situation worse.  Criminals knew people would be unarmed and have loose defenses.

I once heard someone say that “humans are a violent species.”  I’ll quote Agent Kay, from Men In Black, “A person is smart.  People are dumb, panicky, dangerous animals, and you know it.  Fifteen hundred years ago everybody knew the Earth was the center of the universe.  Five Hundred years ago, everybody knew the Earth was flat, and fifteen minutes ago, you knew that humans were alone on this planet.  Imagine what you’ll know tomorrow.”  I will modify this and state that to regulate parallel what Kay said, everyone has a good bead on things until they go sour.  Then a new gene kicks in and they become “different.”  I hope this makes sense.

This new gene makes a person, mob, or group unpredictable.  You need to be prepared for that.

So, you have decided it is time to look at a gun or guns for your preparedness plans.  What to buy first?  I think this is subjective.  You need to look at what you need.  Personally, a handgun would be my first purchase of choice.  Some of you may disagree, and I welcome your feedback below, but here is my reasoning…  A handgun is versatile.  Here s why I think so:

What other factors are there in picking a handgun?  A lot, actually.  Let’s look at Semi-Automatics vs. Revolvers (remember this is just my opinion and perspective so feel free to comment).  Revolvers are just as good as automatics if you are looking at a gun.  If you are on a budget there are some inexpensive revolvers our there, and just the same, that are also inexpensive… Do your research.  I happen to like Nutnfancy’s Youtube channel… Some of his reviews have actually helped me choose firearms to look at and in some cases purchase.

From a philosophical perspective, you also need to look at reliability.  This is an area I admittedly am a lot light on.  What I do know is that there are a few brands of firearms that are very reliable if you are looking at semi-automatics:

To be honest, I do not know a lot about the reliability of most revolvers, however, I have to believe that revolvers are very reliable.  Personally I do not own any, but I have friends that do and continue to purchase them because of reliability.  My friend’s Dad had is .22 revolver chambered to .17 and that is what he carries when he is out in the woods.  First, he loves the .17 for a multitude of valid reasons, second, it is a great, fast, accurate round… It’s his “ol’reliable.” Which brings me to more questions or reliability… Just like your car, a firearm is mechanical.  By that I mean it is compiled of different machined parts that have to work together to fire a bullet at it’s intended target.  To do this there are sometimes hundreds of moving parts, and sometimes only a couple dozen.  With that, there are always weak parts of your firearm.  You should investigate what they might be and purchase several replacement parts in the event you need to replace something that is broken either at home or in the field.  Even I need to stock up more on parts for my guns that what I have today.   With spare parts, comes the knowledge of knowing how to replace them, and prior to that is learning how to disassemble and reassemble your firearm yourself.  You should practice replacing some of these “weak” parts such as trigger springs yourself and reassembling and testing.

I seem to be spending a lot of time on handguns, but I think there is a lot more to take into consideration than rifles (in my humble opinion).

Also, prior to purchasing a handgun, you may want to go to your local range and rent a few of them to see what fits you the best.  You may want a $1,200 .45, but you may not be able to handle it, or it may not fit your hand(s) correctly, or both.  So you may be forced to look at a used $190.00 .380 Bersa Thunder.  Maybe that fits your hands better and you have better control over the firearm when squeezing the trigger.  Trust me when I tell you I would not want to be hit by either bullet.  Both guns are very lethal.  Maybe a .22 revolver is best.  You won’t know until you try several of them.Recently, I had a buddy at the range that I let fire all my handguns.  He was looking for something for himself, and he didn’t know what was best.  He eventually settled on a 9mm, but he thought he wanted a .40 or above.  He didn’t like the way the .40 felt…  Too much power for him.  He is much more proficient with the 9mm.

Once you buy it, learn how to use it.  Become proficient with it.  Practice with it.  Go to the range.  Take safety classes.  Safety classes are just as important as hitting the target with your bullet.  Safety classes will teach you the fundamentals of also being at the ready, the correct way to hold your firearm when at rest at the range, etc.  I cannot stress enough how important they are.   As important as the safety courses could be tactical courses.  These will teach you the fundamentals of drawing and firing on shorter notice, staying behind the right barricades, etc… All training will make you more proficient.

This is the end of Part One of the “Thoughts on Budget Guns for Survival” series.  I know there was not a lot on budget in here, but I promise to be working up to it.  Stay tuned for Part Two coming in the next few days.