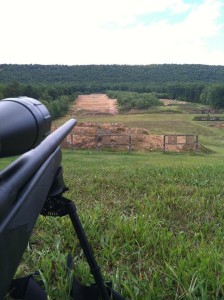 This is the final installment in a series of articles designed to introduce a new or novice firearm owner to the weapons they should have and be comfortable using for a SHTF scenario.  The other installments covered carbine, shotgun, handgun, and plinker platforms…and now with precision rifle, we finish out the five guns that should be in every preppers arsenal.  Of the 5 platforms, I would consider this one (as I suggest it be set up) optional… partly because it will be expensive and partly because its more gun than most people can ever use.  At the very minimum, every prepper should have a bolt action, hunting caliber rifle… but if you’re curious what I mean by a precision rifle, read on. As with the other articles, what you are about to read is by no means comprehensive, it is written as an introduction and I encourage further research, test firing, and professional training.

What is a Precision Rifle?

For a precision rifle, I prefer bolt action firearms and will discuss those exclusively here.  But bear in mind a bolt action can be chambered in many calibers and other action types can be chambered in the specific calibers I will be talking about. The type of rifle this article will discuss is a bolt action, scoped rifle capable of lethal hits on large game as far away as 600 yards. I hesitate to use a term such as sniper rifle, but in some circles that term would be used to describe the type of rifle I’m talking about (I will not debate the use of the term sniper here, just understand I avoid using it for anyone who is not military or law enforcement). A bolt gun with 600 yard accuracy does not need to be a custom-made firearm, they can be purchased at many sporting goods stores across the nation.  Below you will find desireable characteristics and a few recommended firearms as well as other accessories you should use

The perfect off the rack precision rifle…

Here are several rifles that are a good starting point.

The Remington 700 has been the “go to” rifle for military and law enforcement snipers for years.  It has great out of the 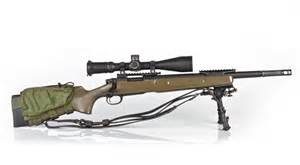 box accuracy and has many aftermarket accessories available. The most common chamber you’ll find off the rack is .308 but others are available from the factory (no customization necessary). The 700 is balanced well because of a well made and well matched stock. Admittedly, Remington’s quality control has gone downhill in recent years but the 700 remains one of the best-selling precision rifles in the nation. At under $1000 it wont break the bank either.

The Savage 110 was at one time one of the most underrated rifles on the market. Savage historically has not been known for their quality products, but when their accutirgger hit the market about 10 years ago that reputation change. The Accu trigger is by far the best production trigger on the market and coupled with the unique barrel nut system 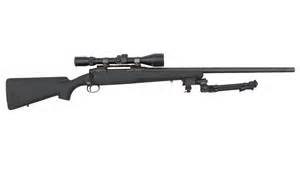 Savage pioneered, Savage rifles suddenly became a sought-after item. As a result many aftermarket parts are on the market, which is a good thing because many Savage factory stocks are atrocious (with the exception of the higher end 110AB models).  The stock is made of light material and when coupled with a heavy barrel, it simply is not balance well (I actually loaded my stock with almost a pound of lead balance it and absorb recoil). Despite the stock design, I have used my Savage 110 chambered and 30-06 to make thousand yard hits on man hole sized steel plates in practice and routinely make 600+ yard cold bore hits on steel silhouettes. Savage generally is priced comparable to Remington and come in under $1000. 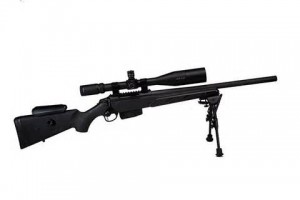 world. They have very good factory triggers, quality barrels, and strong smooth actions. Their tactical models are available with adjustable cheek rests and detachable box magazines from the factory. They tend to be of a higher quality than both Remington and Savage but the accuracy gains over either are minimal. Because they are well-known manufacturer and a sought-after gun by hunters there are many aftermarket parts available. The T3 tends to be priced around $1500 for a factory rifle without a scope.

Hopefully the information above including the recommended rifles has helped some firearm challenged readers look in the right direction for a precision rifle. In closing I would like to add a few thoughts… 1. Other items that should be part of a precision rifle are a bipod, a sling, and an adjustable cheek rest. All three items, if used properly, increase the accuracy of the rifle. 2. I advised trying several different manufacturers and grain weight of ammunition to find what your particular rifle shoots best.  Rifles of the same make will shoot differently and there is no hard and fast rule for ammunition choice….trial and error is the best method. 3. Get professionally trained and practice with your rifle often and at long range.  If you have any questions, sound off in the comments and I will be glad to answer them.