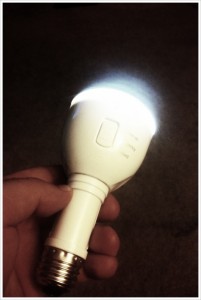 Well, I’ve been talking to one of the guys over at 1-800-Prepare about a new product they brought on.  It’s a light bulb.  No, it’s a flashlight.  No, it screws into my light socket, so it’s a lightbulb.  Well, It’s both, really.  A light bulb and a flashlight.  See, Ascella designed this cool and ingenious little device that doubles as both a light bulb for your lamps at home or in the office, as well as an emergency flashlight in the event your power goes out.

Let me give you some of the features:

Overall, a pretty cool device.  The selfish guy in me wishes the Lumens were higher/brighter so that I could use it in my living room all the time.  I think it would be fine if you had several of these bulbs in a chandelier type of lamp in the kitchen that might be attached to a ceiling fan as you would have multiple bulbs as a source of light.  The prepper in me says that this is a cool bulb that is going to make it to a lamp either in my bedroom or in my home office and always be in emergency mode, so that I can find my way to it if the power goes out on me.  In fact I may buy a couple for myself as well as a couple during holiday season as stocking stuffers / gifts for family, prepper, and non preppers alike.

Overall, I can see having a few of these around the house.  I give it 4 solid stars out of 5.

Here is a video I found after writing this up: