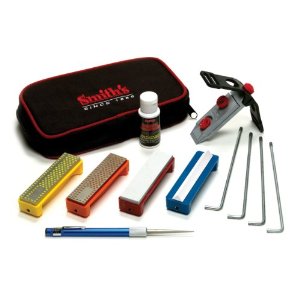 Those of you that really know me, know I cannot sharpen a knife worth a damn.  I’ll get it right on one side of the blade, and  on the other side mangle the angle so badly you would assume the blade is worthless afterwards, if you just give me a sharpening stone and honing oil.  I could never really eyeball the right angle.  Never.  Historically, I have standardized on the Smith’s two (2) step sharpeners.  You know the ones.  One side has the steel to strip the blade into shape, and the other has the ceramic rods to smooth out the rough edges of the blade.  I typically had average and unsatisfying results.  The blades were average sharpness, and if your blade had a different angle on it, then you were stuck with what you got from this device, and it may not be the best angle for your blade.  For this reason I have been partial to scandinavian cut blades as their ange is MUCh easier to sharpen on a stone…

Enter Smith’s Diamond Precision Knife Sharpening Kit.  Skeptical as hell, I spent the $40.00 on the kit, and eagerly awaited it’s arrival.  I was going camping this weekend, and this is one of those little perfect time killers at the camp site when the major work of hauling, chopping, and fire starting have been completed.

Upon receiving the kit I eagerly opened it up the day it arrived.  Further inspection showed that it came with two diamond cut stones, a coarse and fine stone, a polishing stone, and a stone for serrated edges.  It came with a diamond cut rod as well, and I have that particular rod type before.   Once at camp and the initial chores were completed, I sat down read the two pages of directions, thought a monkey could even do this, and commenced sharpening.  Here is what I noticed immediately;  This kit offeres two angles for sharpening 20 degrees and 25 degrees.  I set my blade against the stone with the rod in the holder, and to make sure it was either a 20 or 25 degree angle.  Most of my knives, it turns out were 20 degree edges…

The process of actually getting to sharpen the knife is that you attach the silver clamp to the back (spine) of your knife blade. You screw down the front and rear screws to get a good solid clamp on the blade.  It took me some getting used to, but now have it down.  You then screw the rod into the end of the stone you are going to use, and slip it through the guide on the wing of the clamp.  You then scrape the stone along the blade using the rod and guide to keep your angle consistant on the blade’s edge.  To my surprise, the edges sharpened pretty quickly, even with the harder steel of a couple of the knives I sharpened.  i.e. I sharpened my Mora Clipper and a Blind Horse Knives PLSK-1 without the use of the guides as both of these have scandi grinds.

So, inspecting and following the directions, I set aside the fine diamond cut stone for use, and commenced sharpening.  I sharpened my:

Following the instructions in the kit, all the knives now shave the hair off my arm, with the exception of the Becker BK2.  I think the issue is here, that the blade is so thick that the angle is just not narrow enough on the Smith’s kit.  I’m not too worried about it, as I had planned on sending the knife away at some juncture in the near future to have the blade re ground with more of a scandinavian cut on it.  I find that I like that grind, as my Mora Clipper and a couple of other knives I have had in the past have it, and like it’s utility.   It does take a bit getting used to, however.  But more on that another time.

Now, I did not test the stone for serrated edges yet, but plan to in the near future.  It is just not a function of the knives I have that I use that often therefore I did not need to sharpen any.

This kit, in my opinion, allowed me to sharpen all my knives quickly and efficiently.  I could take them to a knife guy and have him sharpen them for five bucks a piece, or order a kit like this.  If I amortize out the cost, the kit has already paid for itself, in my humble opinion.

This kit is going to be part of my knife module for both camping and my Bug Out Bag.  It will sit next to/near my BoB and my camping gear so that if I need to Bug Out, I just grab the kit with the bag…  Overall, Smith’s Diamond Precision Knife Sharpening Kit was a good purchase for me, because it helped me streamline a process that I was bad at, and will allow me to be more efficient in the futre.  I’m glad I spent the $40.00 on the kit thus far, and am happy I will get years of use out of it.