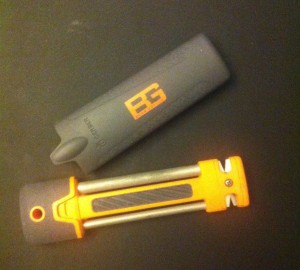 I picked this up over the weekend because when I was out at the family home / Bug Out Location, I realized I forgot a knife sharpener.  So, when I ran out to pick a couple items up for the family dinner, I also picked up the Bear Grylls Knife Sharpener.  Not unlike the Bear Grylls Firesteel I reviewed ‘briefly in this post.  I was pretty pleasantly surprised.  Like the firesteel, it has a sheath, a hole for a lanyard, a rough and fine diamond bar, as well as a course and ceramic fine blade shaping sharpener.  It is 4+ inches long, has rubberized grips so you can hold it securely. It has a good solid feel to it.

All that said, one of the knives I have had the hardest time getting a good edge on is my Ka-bar Becker BK2.  I’ve tried several methods of sharpening it, and have not been a ble to get a good edge on it, until now.  And here is my hypothesis why.   Most of the handheld knife sharpeners like a Smith’s that I have used in the past do an okay job, but the Bear Grylls Knife Sharpener did an excellent job.  I believe in part because the ceramic fine sharpening portion has a squared off area and is not round giving the knife an edge to scrape itself against to better shed shards of steel that need to come off to provide for a finer edge.  After about two or three minutes of shaping and sharpening with the knife sharpener, I was thoroughly impressed with the edge it put on the BK2. 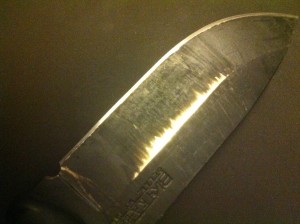 Additionally, I sharpened a couple of my other knives on the diamond bars that have Scandinavian grinds and it did just fine as well.  I paid about $10.00 plus tax for mine, and am sufficiently happy with it for only owning it for two days.  It accomplished a task that that I have been having some trouble with so it was a worthwhile purchase for me.  If you are having problems with a thick bladed knife like the BK2, you may want to pick one up…

UPDATE 4/2/2013:  After using the Bear Grylls Sharpener on multiple knives, I am finding it is much more adequate for thicker knives that might be 3/8″ and thicker blades due to the angle at which thier blades might be shaped, with the exception of a Scandinavian grind, of course.  It seems thinner blades have a little issue with the width of the shaping ceramic bars sharpening the grind…  That said, I stil like it, and it worked well on several of my knives and I don’t think I would have an issue in the field.

Don’t forget about the NJ Preparedness and Alternative Energy Expo on April 20th.  All the information can be found here: http://goo.gl/EWGI7