Local or Alternative Currency in a Community for Higher Economic Sustainability

On the ride home from my boss’s office on Monday evening this week, I was thinking about the economy, and the ramifications of economic collapse.  I thought about how it would effect where I live in NJ today, and I thought about how it might effect my home town, a small town in rural Pennsylvania.  I thought about the game of Monopoly, and I thought about how money changes hands and how it flows from consumer to business to financial institution to manufacturer or vendor.  I thought about how a community could isolate itself and protect itself from economic collapse, and it hit me. Monopoly money.  Yes, I said Monopoly money.  But, not really.  By that I mean that a community of any size can add an additional form of currency.  What?  isn’t that illegal?  Don’t we have to use the “dollar” as currency for trade? The answer is no, absolutely not.  There is no law on the books that makes it illegal to use an alternative form of currency to purchase goods and services if the vendor(s) in question are using that alternative currency as a barter item in doing business.

Knowing this, I came home and did a little bit of research.  Did you know that the Birkshire’s in western Massachusetts has their own alternative currency called “Berkshares?” It has it’s own Website to discuss how the Berkshares are used, in fact.  The Berkshares are issued by Berkshares, Inc.  a non profit organization that works with “participating local banks,” businesses, and other non profit organizations.  The beauty of this model, who’s detail I will try to dig into here a bit, is that it is a working model today, pre-collapse of any kind.  They use their Berkshares to do “local” business with those that participate.  Giving it some thought, if you have a “local butcher, local doctor, local dentist, local farms, etc.  Then essentially, the alternative form of currency can remain local, primarily because no one outside the community will accept it, but also because it creates economy in a cyclical fashion.  For example, I go to work, earn dollars.  At my participating financial institution, I trade in some of those dollars, hypothetically, for Berkshares, or the local currency.  I then take that local currency to the local grocer.  I purchase chicken, steak, eggs, bread, and milk with my alternative currency.  All of those products were processed and handled by the local farmer(s), butcher(s), and baker(s).  In turn, the grocer pays for all or a portion of his products in this alternative currency to the farmer, baker, etc.  The farmer, Baker, etc. then takes their local currency, and uses it to grocery shop, eat out at a participating restaurant, or go see a movie.  At some point all these people and / or businesses deposit some or all the alternative currency in the participating local bank.  The bank assigns the currency to the appropriate accounts and holds it in their vault until there is a withdrawal.  Maybe even your employees choose to have a percentage of their paycheck payed in this alternative currency allowing them to save or deposit in that format immediately upon pay day….  It is an interesting thought, and it makes you independent of the declining dollar and of inflation, per se.

Now for the hard question.  How is the local currency backed?  What is it really worth?  Is an arbitrary number assigned to it?  Is it backed by the dollar?  Is it 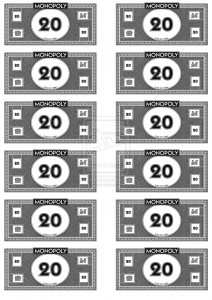 backed by deposits or real investments?  Does it have to be backed by anything?  I need to do more research.

One of the advantages that I see for an alternative form of currency is that a depressed area due to plant closings, job loss, etc. could give those in need a medium to help sustain themselves by being able to purchased locally produced products and services.  Some might call this a welfare system and may sound eerily like a food stamp program, but the currency should be good for much more than that.  It provides a new system for the “local system” to thrive on.  Maybe the economically stressed family or individual goes to work for a farm and gets paid in the local alternative currency.  This circumvents payroll taxes, as well as, many other fees that the farmer might incur.  However, it also gives the farmer extra hands to get his job done more efficiently, and also gives the distressed individual the currency they need to put food on the table for their family and more.  They may be able to take the alternative currency to the local participating financial institution and trade it in for real dollars if an exchange rate is set, allowing them to free themselves to begin freeing themselves of the financial distress they have been under, allowing them to circulate outside their local community should they wish to.  To be clear though, I am not sure how the tax laws work regarding local currencies, so that is also a point of investigation… I am purely speculating…

Personally I am fascinated by this concept.  Salt Springs Islands, British Columbia is another community that has a local currency called the Salt Springs Dollar.  You can purchase it directly from their Website, and they have a list of participating institutions there as well.  Just fascinating.

Now, in a SHTF situation or a survival situation, where you may find yourself within an organized community of preppers, that has created their own currency, I believe you can create a winning formula for sustainability within the group so that resources can be viewed in much the same way they are with our national currency.  It may take much of the barter system out of the fold, if actual values can be assigned to the products and services produced and offered.

I even found a website about creating your own local currency that seems to be pretty darn good.  Check it out:  http://localcurrencycouncil.org/.  From their “About Us” page, they describe themselves as: “The Local Currency Council serves as an advocacy group dedicated to preserving the fundamentals rights of self-governing local-economic systems. We provide a communication platform for developers and supporters of local currency systems.”  Pretty interesting.

Here is another website to check out as well:  http://neweconomicsinstitute.org/content/local-currencies

As I mentioned, I find this concept fascinating.  I find it intriguing, and I think the concept is brilliant as it supports a more sustainable community, and dare  I even say a greener community that relies less on the carbon footprint of those outside the local area for resources for life.

Please comment and let me know your thoughts on such a program to locally augment the economy, and stimulate local growth and financial prosperity.