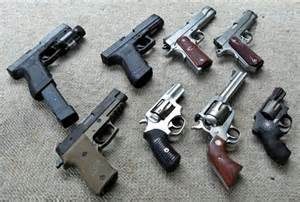 This is the third installment in a series of papers to educate the new prepper about what weapons they should have on hand.  I’m approaching this from a SHTF scenario and an everyday carry, personal protection perspective.  While I’m not advocating using any firearm in an offensive manner, I stress that being able to use one to defend yourself is imperative… so when I use terms like terminal ballistics or knock down power, keep the defensive mindset.

The third gun to consider adding to your survival arsenal is the handgun.  Often times, people put too much emphasis on their sidearm and prioritize it over other firearms.  In my opinion and personal experience, handguns inherently suck… they are underpowered, have a limited ammunition capacity, and are inaccurate past a few yards.  However, sidearms do have their place… they can be concealed easily, deployed quickly, and reloaded fast making them excellent or everyday carry.  FBI statistics state that most armed encounters happen within a few yards so having a handgun for personal protection is a must, but if given a choice, go for a rifle or a shotgun.

Just like any other type of firearm, there is no shortage of handgun types and manufacturers on the market.  I will discuss a few of the more common handguns and make recommendations based upon reliability, stopping power, weight, cost, and overall acceptance as a defensive weapon….. but keep in mind, this analysis isn’t complete and you should find a gun you like and stick with it. 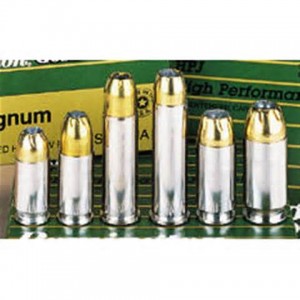 Lets first talk about what caliber you should look into.  Some will say you need to carry a 45 caliber because you need that knockdown power… some will say a 32 will suffice with proper shot placement.  I won’t get bogged down in that debate… but I will give a few simple facts.  Emergency room doctors cant tell the difference between a 9mm, 38 special, 357 magnum, 40 cal, or 45 cal bullet wound when its in soft tissue (muscle, organs, etc)… the difference can be seen in structural damage however (bone breakage) and 45 and 357 stand head and shoulder above the others.  I carry a range of personal protection guns but I adhere to one rule… I carry a platform I’m training with at a given time.  If I’m training with my Glock 34 for multigun matches, Ill carry my Glock 26…. if Im training with my 1911 for IDPA, Ill carry my 1911 ultra carry…. if Im training with my Smith 686 for ICORE, Ill carry my Smith J Frame.  Carrying the same platform firearm allows for faster draw, reloads, and sight acquisition (you fight how you train… keep that in mind).  I worry less about caliber and more about how I can deploy the gun and put accurate hits on target.  That being said, follow these two rules: 1) purchase and carry the largest caliber handgun you can reliably conceal, deploy, and control and 2) practice… a lot. 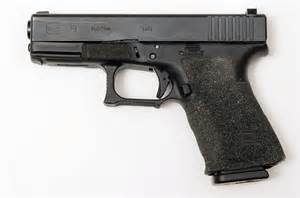 Glocks came on the market in the states in the late 80s and at first, met with a lot of resistance (mostly due to the composite frame) but they have thankfully stood the test of time.  They are now the most commonly used gun for competitive shooters and law enforcement and have become the firearm many other manufacturers compare themselves to… for good reason.  Quite frankly, they are an engineering marvel; the barrel axis sits low enough on the frame and the grip angle aligns the gun so that most of the recoil is transferred directly rearward along the shooters forearm bones; they only have 6 moving parts in the action, making them very reliable; they breakdown easily into basic components, making cleaning simple; the generation 4 glocks have interchangeable backstraps so one gun can be used by multiple shooters with minor modification.  There are many aftermarket accessories for glocks out there (triggers, recoil springs, etc) but an “out of the box” glock will give an average shooter years of service with no problems (I have an unmodified Gen1 model 26 with well over 10,000 through it).  They do have a few drawbacks however: older generation models have grips that dont fit everyone and cannot be changed (having a glock and a dremel tool does not make you a gunsmith… modification just weakens the frame); glocks must shoot jacketed ammunition because of the design of the barrel (lead will over time create deposits in the rifling); they are a “safe action” pistol and there is no trigger safety… some shooters find that troublesome (but ultimately it makes the firearm that much easier to shoot and easier to get used to).  A glock wont break the bank… they generally cost in the 500 to 600 range new. 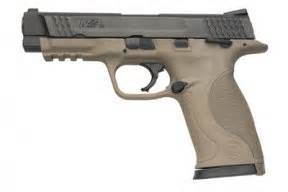 There are many composite frame firearms on the market now.  The Springfield XD, the Smith and Wesson M&P and 442, the Ruger SR40, and the FNH X and P series  are a few notable models… but the list goes on.  I wont get bogged down in the debate on each one, but I will give a few insights into composite frames and reference a few I have dealt with personally.  Composite frames are lighter than their metal counterparts.  This makes them easier to conceal and more comfortable to carry in a holster for a lengthy period of time… but a light frame allows for more felt recoil and that can be a problem for some people… especially when chambered in 45 acp or 357 sig.  Many modern semi-autos are ambidextrous (such as the S&W M&P)… if you are a lefty and tired of having a magazine release that is difficult to operate, you may want to take a look at a newer model.  Composite frames often have interchangeable back strap so one gun can be shot by multiple shooters with different size hands with minor modifications.  A decent composite frame can be had in the 600 dollar range. 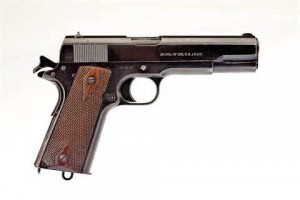 The 1911 is over 100 years old.  It has stood the test of time for several very good reasons.  First, it has proven through multiple military engagements to be a reliable sidearm.  Second, it has been around so long and is so favorable there are many aftermarket parts (triggers, sights, magazines, grip panels, ambidextrous safeties, etc).  Third, its large, steel frame make it a comfortable weapon to shoot despite being chambered in a larger caliber.  This is a double edge sword however and is actually one of the drawbacks to the 1911… while it makes the gun easier to shoot, it makes it difficult to conceal and wear in a holster all day.  It can also be a bit of a bear to disassemble and reassemble because of the complexity.  Given the good and bad, you cant go wrong with a 1911 from a quality manufacturer. A quality 1911 will cost you, making it less than ideal compared to composite frames… look to spend somewhere around 1000 dollars for a quality 1911. 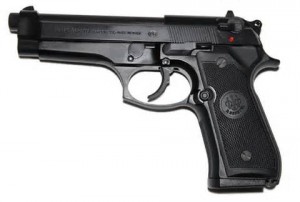 The Beretta 92 has been a staple of the US military for almost 30 years.  The M9 (military designation) shoots 9mm luger but other calibers can be had.  The most common configuration on the market in the US is the 92FS but other Beretta models are available.  The 92 is accurate, well built, and has a large magazine capacity.  Its also not overly heavy or bulky so it can be carried for long periods (but can be difficult to conceal).  The nomenclature of the gun leads to problems however… the safety/decocking lever is counterintuitive to a persons movement when taking a firing grip and the mechanisms of the gun still function (slide, ejector, etc) while the safety is engaged.  Without a proper indicator of either an engaged safety or a possible malfunction, the operators problem solving for an inoperable firearm is complicated.  With practice/training, the 92 can be mastered and any problems with nomenclature can be minimized and is an excellent choice for a sidearm.  A Beretta 92 can be had for under 800 dollars. 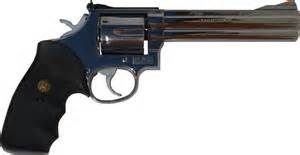 Revolvers don’t get a lot of press in the defensive firearm world for several reasons….they take longer to reload, hold less ammunition, spare ammunition takes up more space, and they have a longer, heavier trigger pull than semiautos.  For these reasons, I advise anyone looking to purchase a handgun to buy a semiauto.  That being said, if an experienced shooter feels more comfortable with a revolver than a semiauto, Im not one to tell them to change (shoot what youre comfortable shooting).  I would advise, however, if you choose a revolver, train with a it extensively to master the longer trigger pull and reloads.  Purchase a 4 inch barrel model… it has decent accuracy but will reholster and draw relatively well.  I would also advise using a common and decent size caliber such as a 38/357… the 327 magnum is underpowered and 44 magnum is overpowered and both may be difficult to come by in low ammunition situation.  Look to spend under 800 dollars for a revolver but prices will vary widely based on finish and configuration. 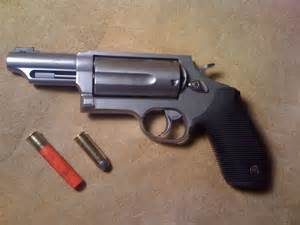 There are many novelty guns on the market and they serve a purpose for an active shooting enthusiast, but as a self defense firearm, they are useless.  Let me highlight a few things to stay away from and why.  The Taurus Judge is a revolver chambered in 45 long colt and .410… it is fun to shoot but a handgun that shoots birdshot or buckshot has no real purpose other than having fun on the range (the rifling causes the shot to spread more than a smooth bore and any benefit of a handgun shooting multiple projectiles is negated).  The Ruger LCP (and similar subcompacts chamered in 380)… it is small and easy to conceal in a pocket but shoots an underpowered cartridge and because of its thin backstrap, is not comfortable to shoot.  The Desert Eagle is a semi auto chamberd in 50 cal or 44 magnum… it has massive knockdown power but is very large frame and difficult to carry for too long and difficult to control for accelerated shots.

This has been a brief overview of handguns on the market that you may consider purchasing as a sidearm.  I would advise doing further research and possibly shooting any gun youre interested in purchasing.  As with any firearm, you get what you pay for… so buy from a reputable manufacturer.  I hope this writeup has helped some of you “firearm challenged” folks look in the right direction. Look for other posts in the coming weeks dealing with other platforms.