Precious Metals As Currency, My Thoughts 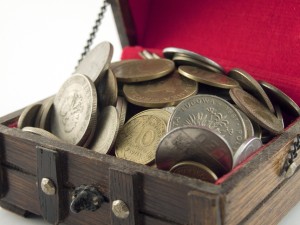 I have a somewhat skewed view of precious metals. I believe that in a post SHTF situation people will not just turn to precious metals as currency.  The average person will raid their change jar and use whatever cash they have on hand to pay for goods until they run out of that fiat currency.  They have no choice. It’s all they know.  Additionally, being a fiat currency, it’s worthless (the US Dollar), backed by nothing, and it’s value is clearly only perceived after the SHTF. They’ll use what they have until what they have is gone, and then they get desperate or get smart about what they have in their personal inventory; alcohol (beer, wine, & liquor), fuel, food, ammo, soap, jewelry, etc… It becomes their currency.

Precious Metals… What are they worth? Really? My view is that they’re worth very little until you come across someone else post SHTF that has use for them. Then and only then is their perceived value realized. Sure they’re worth something while the markets are up and running, when you buy them, when you sell them, etc. But how valuable do they become post market value if the grid is down? The markets of course fluctuate and the value of the precious metals fluctuate with it, whether organically, propped up, or artificially suppressed. I believe precious metals become more valuable to those that are prepared to use them, have them, and have resources to barter and trade for. Otherwise, precious metals are worthless, with the caveat that if someone on the outside sees them being used to sell or procure resources, they will realize value in their minds. They will suddenly need some silver, gold, platinum, copper, or whatever is being used as the currency of choice.

So what does this mean?  I believe it means that unless you know anyone else who has the same belief as you about precious metals as currency they are pretty worthless.  Those that don’t have them pre-SHTF may not see the value in them when you need to use them.  I believe you have to have a network of people that plan on procuring, storing, using, and bartering with them when the time to do is made apparent.  I also feel that in order for this to happen, you’ll need to be in a situation where you have to have a relationship with, and are in relatively close proximity to those that feel the same as you.  That is not to say that pop-up merchants, merchants on main street America, etc. won’t eventually see the value in using them.  In fact, I am pretty sure that is an inevitability that they will see it as high value.  I also make the assumption that those same merchants will take any consumable that has perceived value as currency as well.

What are your thoughts?