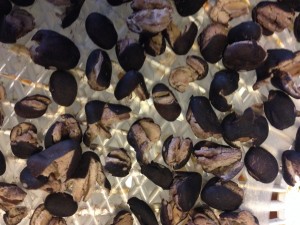 So, I didn’t even know you could dehydrate black beans.  I suppose in the back of my mind, I knew it, but thought since I was jumping back on the band wagon again, that I would try some experimentation as well.  That said, I used four cans of black beans, a colander to rinse the beans, and my dehydrator.  I started with two cans, just in case they did not turn out the way I had anticipated.  Here were the steps:

The goal of this experiment, is to do a couple of things.  First, decrease the size of the beans and weight for storage (and potentially transportation).  If the experiment works, they could be used with hiking as well along side other dehydrated vegetables for a trail snack or meal.  Second, to see how quickly I could rehydrate them for consumption.  My hypothesis is/was that the dehydrated black bean (or other legumes) will rehydrate faster than a dry bean purchased at the grocery store that needs to be soaked for hours or to be set in boiling water for an extended period of time.  Note:  I do not want to discount the dry beans, I still believe they are good for food storage.  However, for an expedient meal for myself and/or another, in a survival situation or on the trail, the rehydrated (dehydrated) beans could be a quick easy way to make a soup, or to create a quick meal or snack that is packed with fiber and protein.

For transparency, I used Goya brand 15.5oz canned black beans.   What I noticed, is that the black beans didn’t look like dry beans in the plastic bags that you might buy in the grocery store.  They cracked and broke as they dried.  I’ll likely go to a slightly less expensive brand, as I spend on the black beans and continue to dehydrate.  My goal is to fill a five (5) or six (6) gallon food grade bucket, calculate the nutritional value and portion sizes based on a daily caloric intake of 2000 calories per day.  Then I will seal them up with oxygen absorbers… I’ll also seal some up in a Ball 1/2 gallon jar and keep them for use in other recipes…

Rehydration:  In in my attempt to rehydrate the beans, I tried the microwave method first, in light of not being patient.  I put 1/4 cup of beans into a pyrex bowl.  I added 1/2 cup of water, closed the door and cooked the beans for two minutes.  The water boiled, and the beans came out very hot.  I stirred the beans and water, and noticed that the bean itself looked like it partly deteriorated leaving a soupy substance and the skins for consumption.  Kind of like a bean soup.  I stirred a bit more and the liquid began to thicken a bit.  I added some salt, pepper, garlic powder, and onion powder.  And of course, I consumed… It did not have the consistency I was anticipating.  Rather, it had the consistency of a slightly thick soup, and partially filled black bean skins.  It wasn’t bad, but not what I was expecting.  The plus side is that they rehydrated very quickly.  And in a pot, I assume they would rehydrate in boiling water in five (5) – 15 minutes…

What’s next?  I am working on dehydrating a tray of Garbanzo Beans with the last tray of two black beans, and plan on dehydrating red beans, white beans, etc.  A thought I had was to dehydrate two or three 2.5 gallon mylar bags full and seal them in a bucket for variety sake as well. 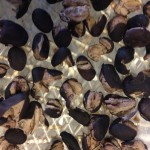 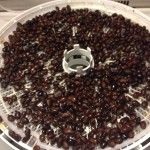 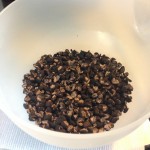