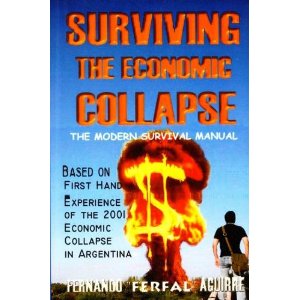 I recently heard of a man called Fernando “Ferfal” Aguirre from Jack Spirko over at The Survival Podcast. Ferfal is from Argentina and has lived through their economic crash from December 2001 until today. He wrote a booked about his experience called Surviving The Economic Collapse. He also has a blog called The Modern Survivalist.

I bought the book because Ferfal is one guy who has lived through a situation that I think will be repeated in the United States, sooner rather than later. Rather than speculate about what it will be like after an economic collapse, Ferfal lived it. I don’t think any other book out there has been written by a person who has experienced a real collapse. This is my impression of the book.

First of all, when I picked it up, I could not put it down. I read it almost exclusively on a Sunday morning through evening. It was full of reality based advice regarding what you must be prepared to face.

Ferfal starts off describing what happens during a currency collapse. First, you start to see hidden inflation in the products you buy each and every day. The quantities get smaller and the prices go higher. We all know this is happening as the cereal boxes contain less and cost more. About 18 months ago, I notice this effect in generic Cheerios when I bought a new box and placed it next to an old one. The new box was smaller, but undoubtedly cost the same or more. This is not only anecdotal, but systemic. It is happening in the US right now.

Second, the politicians will say everything is Ok in the banking system, all the while the insiders will be closing their bank accounts and fleeing the country. In Argentina, one day they woke up and the banks were closed and people could not access their money. After a few day, they could access some of their money, but only in small amounts per week. Imagine if you will, a similar situation. You have $50,000 in the bank, but your access is shut off, even if you need it to buy food and pay bills. Stores don’t accept credit, debit or checks. After the banks closed off access to cash, cash was still king, even in hyperinflation. If you had cash, you could still buy stuff. If you did not, you could not. I am not sure that this will happen in the US, but it would not surprise me. Perhaps there will be a bank holiday to prevent runs, but there will be some sort of interruption in access to your money and even your safety deposit box. Are you prepared for that? I’m not, but I will be.

In that moment when the crisis hits, visible prices go up overnight. Ferfal tells a story of going to the equivalent of a Home Depot and seeing the clerks running around rapidly changing prices to reflect that days higher, inflated prices. The new stickers would be stacked six or seven on top of each other from the previous day or from that morning. What did not happen was Weimar Republic hyperinflation. Certainly, it was 60% over a period of months, but not 6000%.

Also seen during the collapse is an increase in homelessness and crime. He saw a gradual but steady increase in the quantity and density of homeless people, not just single people, but whole families. At the same time, crime got steadily worse. Good neighborhoods and neighbors got robbed or their homes invaded which was previously unheard of. Those are the signs of the collapse.

There were many other themes throughout the book. Ferfal is a big advocate of upgrading your body. If you have the possibility of getting Lasik to eliminate the dependence upon glasses or contacts, he recommends it. If there is any necessary dental work, get it done. Same thing with any other medical problems. Take care of them before the collapse. After the collapse, you may not have access to medical professionals, and if you do, it will be extremely expensive. This is something that I definitely need to pursue (dental work).

Of course, every survivalist recommends getting in good shape. Ferfal goes several steps beyond this by recommending rigorous self defense readiness, from hand-to-hand combat to knife fighting and especially guns. He goes overboard on self defense because he has seen the crime wave that inevitably follows an economic collapse. Home invasions, robberies, kidnapping, murders, and worse. If you are not prepared to defend yourself, then you are prey.

Other great sections of the books are building people networks, how to prepare financially, recession-proof jobs, why a barter economy does not work and even the selection of guard dogs. Many are good, some are probably better suited to Argentina. He goes heavy into gun selection. I will give you a clue, he is a Glock man, through and through. If you don’t like Glocks, skip that section.

Overall, I would say that this book was the best I have read on Modern Survivalism. It brought realism to the subject when other survivalists want to envision Mad Max or Patriots. I cannot recommend it enough. It has made me want to focus more on security and finances as well as push my food stores to six months (yeah, yeah, I’ve been saying that for the past six months, but I’ve been busy.)

Get the book. Read it. Figure out where you are weak and shore it up. Now.