Ammo Update for the Henry AR-7 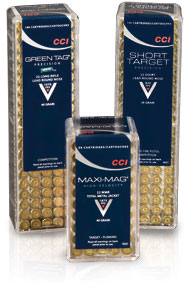 I had my Henry AR-7 Survival .22 out this past weekend to do a little target shooting.  The more I use it, the more I am not sure I am happy with the front and rear site on it.  The rear site is a peep hole, and I guess I may just not be used to that.  But that is not what this post is about.  This brief post is about using three different types of ammunition in the Henry this weekend to see what the results would be.  If you have read the past posts on the Henry, you know I have had some trouble with standard lead rounds of various manufacturers.

So, I went to the range this weekend with CCI brand ammunition in “Standard, Maxi Mag, and High Velocity” rounds.  I used each one with four magazines for each of the three types of ammunition for reliability purposes.  First, I loaded up the standard velocity CCI.  I will preface this by saying that in a standard magazine in both my Wather P22 and my Ruger 10/22 this ammunition feeds flawlessly.  However, in the Henry, after chambering the first round of the standard velocity, I could not get a subsequent round to feed correctly.  Almost every round that would try to chamber after expending a previous round would get caught on the barrel as it was trying to feed ruining the round because the soft lead would bend and dent.  I would then have to manually charge another, expend it, and the subsequent round again would jam.  Eventually, I would like to try another Henry just to see if it is mine that is having this issue.  If you own one, I would be curious to hear about your experience with a soft lead round.

The second round that I loaded and tested was the CCI Maxi Mag copper coated round.  Again, I loaded two magazines and then reloaded the two additional magazines with additional rounds.  The fed flawlessly every time.  Round after round fed and ejected perfectly.  The cost of 100 rounds was $7.95 at a local gun shop in my home town in PA.

So, what I learned is that the coated rounds are obviously better performers than the standard round in the Henry AR-7.  I know that Henry just re-released the Henry, and mine is a generation older than the version that was just released.  Whether there were improvements to the receiver for feeding a soft lead round or not is a mystery to me at this juncture.