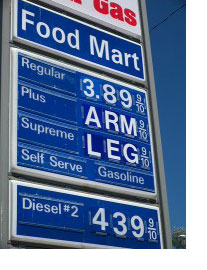 As of writing this crude oil is still flowing in the Middle East and through the Suez Canal (as well as other products) in spite of the chaos in Egypt. Will that last is the question. And yet even with the continuation of oil world prices for crude are rising as is gasoline at the pump.

2011 oil and gas price predictions are all over the map from $90-$100 per barrel crude to retesting the 2008 $147/barrel level. Concurrently predictions of gasoline prices at the $5-$6/gal level or higher are equally being seen in the some peoples’ tea leaves.

I don’t make price or breaks predictions and I’ve lost far more than I ever made listening to TV “experts” on finance and markets. But it is a reality that trouble in the Mid East always leads to some kind of bump in oil and gas prices.

–          Official inflation is only around 2% but that doesn’t include food and fuel costs (how convenient!).

–          The 99ers are rapidly running out of benefits with no decent jobs recovery in sight for years to come at a minimum (hail the jobless recovery!).

–          Individual states and cities are technically, and in many cases functionally, bankrupt.

If the chaos in Egypt does impact the flow of oil through the Suez Canal, or even worse, ignite further chaos in other Middle Eastern countries (notably Saudi Arabia, Yemen, and UAE) the predictions for $5-$6 or higher gas will easily come true.

With all this on America’s platter already the question becomes: If it does happen (realistically things are rarely as dark as predicted), will this be the tipping point in America for social unrest?

People are already heavily burdened to pay for the necessities of life. Like it or not oil as in gasoline, heating oil, and diesel is one of those essentials. All fine to say that in 30 years we’ll be 80% or better on “green” energy. Maybe.  Maybe not. But that isn’t today. People still need oil to heat their homes and power their cars (not to mention electric generation).

The price of oil ripples into food costs too which are already on the rise due to commodity prices and world demand. Those tractors and harvesters don’t run on fuel cells or solar batteries. The trucks that carry the product to the food processors and then to the supermarkets aren’t wind powered. The trains that take food across the country in a matter of hours can’t do it on compressed gas. And that doesn’t even begin to consider the costs for ocean freight, air transport and travel, plastics and synthetic manufacturing (of which petroleum is a significant raw material).

A great many American families are already living a very tenuous life through no fault of their own. Job loss, hours worked loss, little is any pay raises over the last few years, rising fees and taxes at all levels of government, near zero interest on bank deposits, CDs and bonds, all put a squeeze on unsteady individuals and families. A sharp and sustained rise in oil prices may be all that is needed to push thousands, perhaps millions, of families off the edge.

Even without pushing families a rise in oil that translates to a rise in gasoline will have a negative impact on the economy. People will cut back on discretionary travel. Many are already doing so. That translates into lower incomes for the travel industry including hotels/motels, food and shopping, day attractions and events, etc.

All this can easily be the action that kicks out the already wobbly legs of this [alleged] economic recovery and pushes the nation into a deeper recession if not full blown depression.

(Footnote: This article is not about getting off oil, too dependent on Middle East oil, “green” energy etc. The reality is at this stage of our social and technical development there simply is not anything else as universally applicable as oil, nor as efficient, economical (all things considered up to now),  and as abundant (‘peak oil’ is a myth) as oil. Our entire society and economy is built around the use of oil. It can be changed. And not doubt someday it will change. But “change” needs to be for the better and not merely for the sake of “change” itself. Just as our leaders are calling for a slow and careful transition to more democratic structures in Egypt and other places around the world so do we have to adopt a slow and careful change to our society for less oil use. Anything less is a shock to the American system that may be irrecoverable.)