This weekend I had an “epic fail” (as the kids say) with my new solar cooker. I tried to make a simple dish, Arroz con Pollo (chicken with rice), but did not get past 100F. Why? 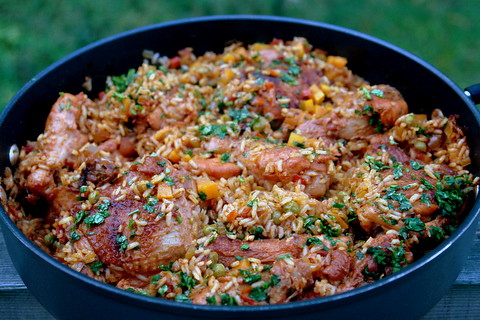 The sun! As it turns out, Saturday morning and afternoon was the time mother nature chose to break its drought and be cloudy and rainy in Houston. I put the cooker out with reflectors at 10 am, and it was a little cloudy. As the morning went along, it would be sunny, then cloudy, finally turning to rain. I could see from the thermometer that the temperature did not go above 100F. In the end, I pulled the plug on the experiment around 2 pm when it started raining. So, lessons learned:

1) Trying something new is never a mistake, especially if it was about $7 in ingredients and 1 hour of time.

2) Never count on the weather to be your friend nor your forecaster to be right.

3) Always have a backup plan. On Saturday, that was buying ground chicken and making chili.

Of course, this will not be my last attempt at a solar meal. It is just one of many!