Review of the Peak 1,200W Mobile Power Outlet/Inverter for My Bug Out Vehicle 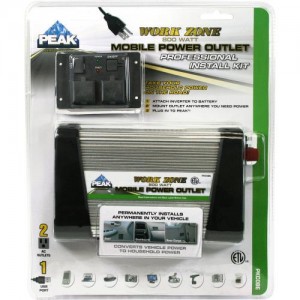 I recently purchased a Bug Out Vehicle.  Admittedly it is a 1990 Jeep YJ/Wrangler.  It was clearly the base model.  However, it has a lift kit, bigger tires, and a few amenities you might want in a bug out vehicle.  But one thing it lacked was the proverbial cigarette lighter to power my low voltage devices… So, one of the first things I did was to research putting a cigarette lighter in the Jeep.  That quickly gave way to low end inverters, which quickly gave way to what I will call mid range inverters, so that I could power multiple devices.  I decided on, at the time, what was a 1000 watt inverter (See the unit I bought and installed here) with a couple unique features, and what I will call requirements.  The first requirement became a/multiple USB ports.  The second was obviously a few three prong 120 volt outlets for basic appliances that might require charging, such as the air pump for my air mattress for camping, or my small cooler which has a small refrigeration unit built in to keep items cool.  Not to mention running small power tools if I had to or to charge their batteries.  The bonus plan was the remote unit that you could also mount elsewhere in the vehicle.  That was a real

The good:  The inverter works flawlessly, thus far.  I primarily use the remote unit since it is between the seats.  Second, the remote unit runs independently of the inverter itself, so I do not have to turn it on and off to use it.  It primarily has a USB cable plugged into it so that I can run my phone off of it.  I also just purchased an AC to DC inverter so that I can mount a 3 or 4 port cigarette lighter type power unit inside the center console as well for my handheld CB and/or a portable Ham Radio unit.

The bad:  It’s mounted under the back seat, and I need to find a way to cover it and waterproof it so that if I leave the soft top off the Jeep that it does not get wet and ruin the unit.  Also, I have not “tested” the unit against the battery yet. So I am not sure how long the unit will last with the car not running.  My buddy John suggests hooking up a deep cycle battery or two as well, and I have thought about adding another battery under the hood, and eventually beefing up the alternator as well in the future with a larger/heavier duty one to run more power in the event I am pulling a lot of power and running the vehicle simultaneously.

Thus far however, it seems to be a good purchase.  If anything adverse happens, I will be sure to update this post.