A necessary addition to any suburban survival arsenal is a plinking rifle.  You may be asking yourself, what is a plinking rifle?  Think of the rifle you would use to shoot tin cans off of a fence post in your backyard…. that is a plinking rifle.  The benefits of a plinker are 1) little or no noise (so neighbors wont complain and you in a crunch you wont give away your position), 2) you can teach a youngster or new shooter firearm safety with excessive recoil, and 3) the ammunition is cheap (in some cases, reusable).  In a different paradigm, having a rifle that can be used to hunt small game in a suburban environments is invaluable…but a plinker isnt limited to small game, with the right ammunition in the right rifle, a plinker can also be used to take larger game

There are endless firearms that can be catagorized as plinkers so instead of giving a laundry list of guns, I will discuss several common firearms chambered in common caliber (.177 Pellet/BB, .22 caliber, and .22 Win Mag).  Keep in mind, these are not the only models and manufacturers on the market… they represent a sampling of what is available and firearms I have personal experience with and can recommend or not recommend. 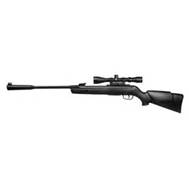 These rifles are far from being the Cadillacs of the pellet rifle world (think Olympics for really high end) but they have attributes that are very desirable in a plinker. Most GAMO models have an integrated suppressor (legal without the federal tax stamp on suppressors because it is integrated into the barrel).  Some have the ability to shoot faster than the speed of sound (1100 feet per second for you non science types).  The speed and accuracy of a pellet fired from a GAMO rifle make it devastating on small game… combine that with the ability to practice or hunt in a suburban environment without drawing attention to your actions, the GAMO is invaluable.  The rifles are chambered in .177 caliber and .22 caliber, depending on the model. For most applications, the .177 caliber is sufficient but people who want to hunt larger game may opt for the .22 caliber. Most models come with an integrated scope and a packet of starter ammunition and all that’s necessary is to sight in the rifle… and they generally run under $200. It’s wise to obtain some high-quality hunting grade spear point pellets to maximize the effectiveness of the gun. 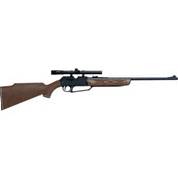 These rifles have come a long way from the red rider lever action carbine we remember from A Christmas Story but they arent as technologically advanced as the GAMO rifles.  They can be picked up in just about any sporting goods store or Walmart across the country and are relatively inexpensive.  Depending upon model and configuration these guns can shoot both BBs and pellets making them a versatile choice for practicing, for teaching new shooters, and hunting small game in a suburban environment… and they can be had for under $50. The included scope is far from high-quality by the rifle has accuracy limitations so the scope is appropriate. The best you can expect is about 20 yards accuracy, but for practicing on tin cans or shooting squirrels in your back yard (which I am not advocating, you run the risk of breaking animal cruelty and/or hunting laws) the effective range is more than adequate. As with anything else, you get what you pay for… If you want more accuracy buy a Gamo or higher end a BB/pellet gun, 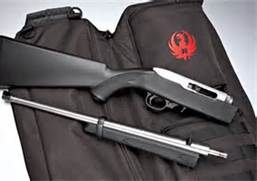 The Ruger 10/22 is one of the most common .22 caliber rifles on the market. As a result, there are many aftermarket parts including stocks, barrels, triggers, magazines, and replacement parts. Unlike some semi automatic .22 caliber firearms, the Ruger 10/22 is not finicky when it comes to ammo, however just like any other rifle, some ammunition is more accurate than others. I won’t go into which ammunition to buy for the 10/22 because I own three of them and each prefers a different type and grain of ammunition for optimal accuracy.  Each of my 10/22 rifles is set up with an optic… Some have see-through rings and some rely solely on the scope. In each case I use a four power fixed magnification because too much magnification can be a bad thing. A .22 caliber projectile has a maximum range for both accuracy and lethality of about 75 yards, for further accuracy out of a .22 caliber you need to shoot a .22 Win mag (more on that below). The most recent addition to 10/22 product line from Ruger is a breakdown model, for backpacking (or bringing a rifle unseen in a small case) this is a great choice. The big drawback for the breakdown model is the case as a giant Ruger logo… not the best for covert carry.  A basic Ruger 10/22 can be purchased for under $200 .Historically .22 ammunition is cheap but the recent ammunition crunch has sent the price of select  ammunition through the roof.

Once, or should I say if, ammunition prices come back to normal, buy as much .22 ammunition as you can and have you can have some real fun shooting a 10/22 at a very reasonable price. I recommend a 10/22 because it is so common, has proven itself reliable, and is relatively inexpensive… but dont overlook other firearms and actions chambered in 22 caliber (such as a Henry lever action or a Marlin bolt action)… but keep in mind, many .22 caliber rifles are not designed for an adult (a short stock is the biggest problem).

If you’re looking for extended range accuracy and better terminal ballistics you should definitely get a 22 Win Mag… and in my experience, stick with a bolt action rifle (because of the long case design, semi-autos can have a tough time cycling the round). These rifles off-the-shelf have a 100 yard plus accuracy and the terminal ballistics allow for a wider range of animals to be hunted. While they are louder than a standard .22 caliber, they remain somewhat quiet.  Because of the limited noise, these guns are a number one choice for poachers… don’t ask me how I know that. With the right ammunition and decent optics a headshot on a dear can easily be made at 100 yards and because of the terminal ballistics of the projectile it will be a lethal shot. I’ve used my 22 Win mag with good results on groundhogs out to 200 yards. Because of the extended range I have a variable power scope on my rifle from three power to nine power with a 40 mm objective, a similar scope can be found on my deer rifles and muzzle loaders and they are obviously a much higher caliber.

The AR7 is titled as a survival rifle….but don’t be fooled by that title. The AR7 seven has some good attributes, it packs up small (the entire gun fits inside the bus stop), it shoots a 22 caliber projectile (so it has a quiet report), and it has a matte finish coupled with an aluminum non-rusting receiver (so the gun is durable). However the gun does have some drawbacks… because of the design you cannot mount optics and still packaged the gun inside the butt stock (but if you prefer iron sights that’s not such a big deal), because of the shortened barrel the gun has limited accuracy and weak terminal ballistics (so it’s a 25 yard gun at best), and the AR7 has been redesigned several times but in all the models I’ve shot I found them to be very finicky for ammunition.  I’ve included the AR7 in this write up not as a

recommendation, but as a firearm to avoid.  While it does fill a niche and I can see it does serve a purpose, I view it more as a novelty similar to the Taurus Judge. Unless you’re survival plan is throwing on a backpack and living in the woods your money is better spent on a different firearm. 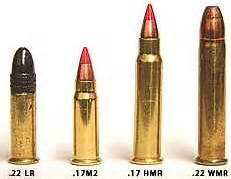 I will admit I have limited experience with this round. I feel compelled to include it in a write up about plinkers but quite frankly it’s not what I would consider a plinker. The design of the cartridge and the design of the bullet make this a highly effective round well past 100 yards. The 17 HMR was designed to be an improvement upon the 22 rimfire and it most certainly is. However because of the cost and availability of the ammunition I don’t recommend a 17 HMR as a staple of your survival arsenal. Historically 22 ammunition and BBs are cheap and widely available, the same can’t be said for 17 HMR. In times of plenty, exotic calibers are fun to have an fun to shoot but when ammunition is scarce having calibers that are widely distributed and easily obtained could be beneficial.

So there you have a few guns to consider purchasing for your survival arsenal. Again, this is not a comprehensive list but designed as a starting point for people to do the research on firearms they may want to obtain. One note I will add, the firearm industry (and especially ammunition) has been going crazy for several months. Don’t run out and buy a firearm on this list or a firearm recommended from a friend without first searching for available ammunition. Visit several local gun shops and look at the ammunition still on their shelves, ask what calibers they’ve had trouble finding, and you may find a different firearm in a different caliber is better suited to your situation.