A potential security issue with Iphones

I found out something recently completely by accident… but realized immediately the implications it has for peoples security is quite disturbing.  I was looking at older pics in my Iphone, while on the albums page I pressed the “photos” button in the lower left hand corner of the screen and then the “collections” button in the top left corner of the screen.  It took me to a screen that grouped photos by the dates they were taken… and also the location they were taken.  By simply clicking on a location heading, it showed me my pics in a map format with the pics superimposed on the map where they were taken.  This not only included pictures I have taken, but pictures people have sent me via text message that I have saved on my phone.

Here is an example of what I mean… a group of pics titled “Bethlehem and Bound Brook” taken in late 2012 has pics from both of those locations.  The large view of this map shows both of them… one, a pic of me getting geared up for a dive certification, was taken in Bethlehem, PA and the other, a pic of my daughter with Santa, was taken in Bound Brook, NJ. 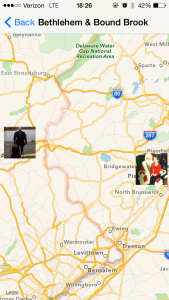 The problem really arises when you zoom in on a picture in this large map.   Heres that view…. 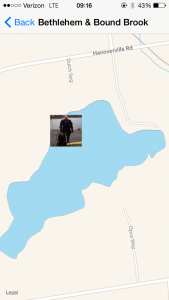 The detail in the map is staggering… right down to the launch I was on at the reservoir.  Other pics (which I will not post for security concerns) show accuracy right down to the house, complete with street names.  In the age of internet dating and craigslist serial killers, this is incredibly problematic.  You can never be quite sure who you are corresponding with online and something as simple as a picture sent to a potential buyer/seller on craigslist could put you at risk.  So how do we fix this particular problem?  I cant speak about any other phone platform (or if it is even a problem on others) but here is how we fix it on an iphone…

Go to “Settings”, then “Privacy”, then “Location Services”, and toggle the “Camera” setting to Never

Other security issues may still be present on your phone with other apps and if any readers are aware of them, please post up in the comments.