My Defensive AR Course with GAPPNJ 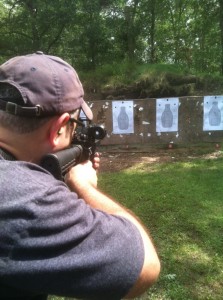 “Oh man,” I thought as I forced myself out of bet this Sunday morning, I feel like I was hit by a small truck.  Wiping the sleep from my eyes, and prior to my first cup of coffee (as I write this it’s almost noon, and still need a first cup of coffee) I felt my lats, deltoids, neck, shoulders, and pectorals in a little pain.  I made my way to the bathroom, looked in the mirror, and focused in on the mirror, and thought, “Are those a couple of black and blue marks on my left pectoral from the day’s “defensive carbine” class,” with Cameron Green owner of Green Academy of Personal Protection.  Further inspection, verified.  Black and blue, and sensitive to the touch.

After slowly acclimating myself to the new morning and a shower, I began to reflect on the previous days events.  Admittedly, I am a novice when it comes to taking a defensive posture with a carbine.  Much if any training outside of the school of life is at a range with a rifle poking holes in a target.  Give me a good old fashioned bolt action rifle, or my SKS, and I am fine, but an AR, which I used yesterday, has a lot of moving parts by comparison.  I wasn’t as familiar as I should have been going into the class… While not necessarily rocket science, it’s a process I am not too familiar with, with the exception of yesterday’s course.

Defensive carbine is designed to teach our students the basics of defensive skills with an AR, AK, Ruger Mini, or SKS… but it is far from basic.  This is not a beginners course… it is essential that each student have a knowledge of their rifles nomenclature, have it properly zeroed, and be capable of 100 yard accurate shots.   (basic proficency means you will benefit more from the class).  Emphasis in this 8 hour course is on firearm safety, the fundamentals of defensive marksmanship, and shooting from a static location or on the move. 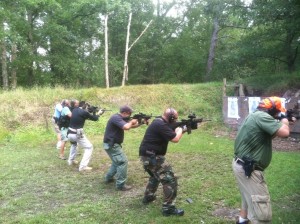 Let’s pick the description apart and see if I can add a little color to it; As the description above is correct, I would add the course is a Defensive Carbine course showing your the fundamentals of defending your home, family, and/or friends from a much worse harmful situation than it could be if you didn’t have the skills to defend yourself.

It was far from a “plinking” session at the range as well.  Cam took you through a process to help you understand the fundamentals of properly holding your carbine in several defensive postures, discussed aim, and how the trajectory of your expired rounds fly so you could compensate for distance as well.  Defensive Marksmanship was also core to the topic of the day.  Hell, it’s the result you are looking for.  We spent the day at various distances from 50+ yards down to five yards in various postures (prone, kneeling, and standing) taking aim at Cam’s command at the targets in question, getting familiar with uncomfortable positions firing your carbine at the target.  What was interesting about it, is that there were a couple positions where you think that it actually might be impossible to aim, and target your rifle on the target and fire, until you actually do it and hit the target in question.  Enlightening to say the least.

In addition to positions, Cam had us run through accelerated shots as well as shooting from cover in three different positions, engaging in multiple targets, and acquiring and shooting targets while moving from side to side.  Couple that with the high humidity and heat yesterday, and you not only got an education and had fun, but you got quite a workout as well.

In all it was a great day.  It was an eight hour course, which made it a pretty long day, but time literally flew by.  Lunch (which each individual brought) was about 30 – 45 minutes of down time, and that was the most downtime we had from the time we fired our first round.

In hindsight, it was a GREAT day with a lot of content packed into it.  In addition, how often do you get to fire off 500 rounds and learn a valuable skill at the same time.  I highly recommend, Cam’s courses as I have been through a couple of them.  With his experience as an educator as well as his experience on the range and many hours invested in his own training, I wouldn’t hesitate to take another one of his courses.  In fact, I told him I wanted to take this course again myself because I wanted more repetition in each position we were shooting in to become more proficient.

Oh, and as a side note, at the end of the class, Cam had us take the same test that a patrolman would have to pass in NJ in order to use an AR.  With the skills learned in this class we all passed or would have passed the official test.  I walked away with a sense of accomplishment, as I know several others in the class did as well.

If you live in the NJ, NY/NYC, and PA areas and you are interested in any GAPPNJ courses you should contact Cameron here. 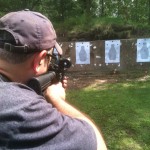 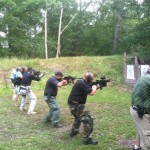