Hurricane Sandy, a Review, by a Contributing Author from Long Island 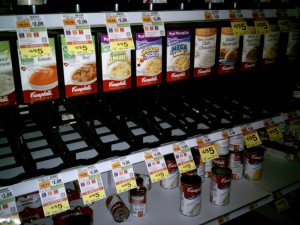 A contributing writer to the Suburban Survival Blog, and lives on Long Island hit hard by Hurricane Sandy.  I’ve asked him for his post mortem recount of the hurricane, what worked and what did not work for him during the storm, power outage, and overal disaster here in the Northeast.

By the time this is published hurricane Sandy will have past the northeast.  As with hurricane Irene back in late August 2011 how badly it impacted you depended on where you lived. Many areas were totally devastated! Other locations got by with minor damage only. From my point of view on the South shore of Long Island about a mile from the bay, it wasn’t so bad.

(I know others closer to the bay weren’t as lucky. Our thoughts are with them.)

Although I felt very prepared since Hurricane Irene had exposed several gaps in my preps that I have been working to try to close. Now when hurricane Sandy came I was even better prepared. But still room for improvement.

The following is a post mortem review of what worked and didn’t work from the point of view of improvements in my preparations since hurricane Irene. 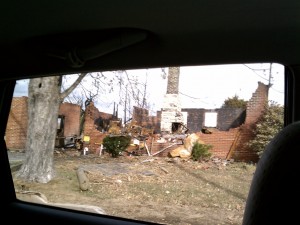 The Good (what worked)

Generator – A few weeks before Sandy I finally got a genie. Hurray! Not a big one. Just 2500 watts load (3250 peak). But I could run at least our fridge and upright freezer on it with a few hundred watts to spare. Didn’t need to use it this time fortunately. But I am looking to upgrade to one at least 5000 watts and little more portable (with wheels) over the winter.

Gasoline Storage – I had some gas stored with stabilizer (Pri-G) for the generator. Enough for at least 24 hours constant use. Would have liked to store more but there is the reality of safely storing it, as well as the chagrin of the wife. It was a reasonable compromise given the likely nature of this threat.

Propane – I picked up 2 new/full 17 pound tanks for the grill to cook and boil water (if necessary).

Food – Had lots more in storage since Irene, freeze dried as well as commercial canned items. Enough for comfortable several days, much longer if carefully rationed.

Water – Also had lots more in storage, both commercial bottles as well as some longer term treated water from the year before.

Ham radio – My HT worked very well. At least enough to connect to net control on the local repeater. Even after the storm passed I was able to get updates from the comfort of my living room.

Compute data – I was able to backup everything I deem crucial (e.g. financial records, certain documents, pics of the kids) to a USB drive. Could easily unplug and take it with us if we had to bug out.

XM Radio – XM/satellite radio was very handy. I had considered cancelling my subscription this year but glad I didn’t. The network was still up even when cable TV was offline for days. Was able to get news and updates without relying on local networks and services. I have a portable Samsung unit I can move between our cars or use inside the house (external antenna out the window).

Miscellaneous – Medical, heat, clothes, tools, emergency repair supplies, defense (if necessary) – all better than a year ago. Still have more to add but I was comfortable given the nature of the threat. 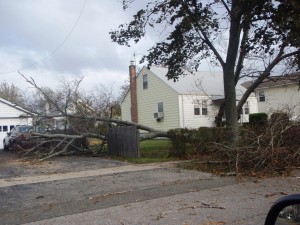 The Bad (what didn’t work)

Generator – Not that it didn’t work. But as previously said I hope to replace my generator with a bit larger one (better more watts than fewer).  Also should have a spare sparkplug just in case.

Fuel – The fuel shortage for at least 2 weeks afterwards was totally unexpected. The Sunday after the storm I spent 9 hours at two different stations just to get a10 gallons. I should have stored more in advance while still keeping safety and the wife in mind. Then again, can’t full every container each time a storm is predicted. This kind of event was total unprecedented in my life.

Evacuation – “Bug out” would have been an issue. Not very well organized for a quick grab-and-go. Need to work on it but that involves the wife who isn’t 100% on board with prepping (getting more so but slowly).

Radio – In spite of year going by I still don’t have a decent battery AM/FM/Weather/maybe SW radio! The ones that I see in stores are either real cheap nothings or very expensive small plastic boxes. I just can’t bring myself  to pay $80-$100 for a plastic square the size of a cigar box! I know I need something but don’t know what.

Water purification – If we did run out of bottled and stored water I would need some way to purify more water. Could boil it on the gas grill (maybe) but don’t want to waste the propane. I have some water purification tablets but need a better filter system like a Berkey. Also need to get the rain water capture system installed next year.

Sanitation – Need some kind of human waste disposal or at least sanitation system. Keeping the  bath tub full isn’t a longer term plan. Digging a latrine isn’t practical in my area, much less during a storm or in the middle of winter.

Ham radio – I need at least one more spare battery for it. A roof mounted antenna would be even better.

Computer – Need a UPS unit for my desktop. Not to keep it running for hours but enough to bridge the occasional power “blips” and enough to safely shut down if there is an outage.

Defenses – Although we did not specifically have any issues, tempers at some gas stations did run high. If food had also been scares for a while it would have been much much worse. Need to improve defenses.

Murphy’s Law in full effect! – As luck (bad luck that is) would have it my SUV gave me trouble just as the storm approached! Nothing I could do about it then but it was unreliable to the point of considering it a “dead” vehicle. Don’t know what I could have done about it. How many parts can you store? Not to mention the tools and knowledge to diagnose and fix it. In the middle of storm, not so easy.

But I think the MOST important lesson learned/re-enforced: Prepare well in advance!!

In the days before the storm you couldn’t find a flashlight or D battery anywhere, literally. And generators where gone too. Same with gas storage cans. Glad I had plenty well in advance. But too many people not only didn’t have these before (what’s so “crazy” about having a couple of flashlights and 2-3 sets of spare batteries all the time??) but they waited too long to try to find them.

Food, especially the perishable items such as meat and dairy, slowly came back into the main supermarkets. Took about 10 days though smaller grocers did have fresh items much quicker. Still not completely back to normal however.

Gasoline remained hard to find for at least 2 weeks afterwards. Ten days after Sandy the powers that be in New York State finally implemented an odd/even rationing program like had been put into effect in New Jersey a week before. It did help with the lines a little, though enforcement was lax. But the price of gas remained very high, up as much as 70 cents more per gallon (cash) pre-Sandy. I was able to get a heating oil delivery a week afterwards at contract price.

Disaster relief efforts – Red Cross, FEMA etc. – continued to distribute food and water. But many local efforts were hampered by government red tape and knee-jerk policies. It was reported that Mayor Bloomberg of New York City didn’t allow tons of donated food to be distributed because the fat and salt content of the food couldn’t be “verified”! I’m sure people cared so much about fat and salt while starving!

Accurate crime reports as it relates to issues of food, water and fuel were hard to come by. There were a few confirmed reports of shooting and gunfire at some service stations mostly in the city as well as looting in the hardest hit areas. Lots of stories and rumors about more violence but I couldn’t confirm any of it. Didn’t see any myself. But for what it’s worth I browsing in a couple of gun shops a week afterwards and they were packed with customers. 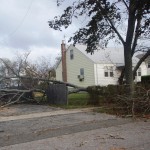 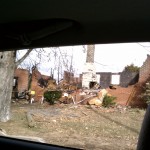 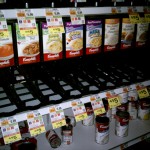