Christmas Presents for My Family (Worth Reading!) By My Friend Kurt

Note: This was republished with permission from my good friend Kurt S.  He currently is living in Croatia, and I thought this relates a bit to survivalism, and asked him if I could re-post this.  Of course he said yes.
Alternate Title: Fuck You TSA

These are the Christmas presents (photos) that I found and bought to send home to my parents, brother, sister-in-law and niece.   They include four very nice coffee mugs, three from local Croatian artisans and one from the Budapest Christmas market; three boxes of nostalgic Croatian chocolates packaged in really beautiful metal balls that are like large Christmas ornaments; three wooden dolls that contain paprika and seasonings from the Budapest Central Market and a set of artistic coasters from Croatia.   These presents were meant to be a nice surprise since I won’t be able to return to the USA for the holidays this year.
Why then am I ruining the surprise by posting photos of the presents on Facebook and saying that they “were meant” to be a surprise as if the presents won’t be a surprise now?   And what’s up with my “alternate title” above?

Well, thanks to the TSA, in an effort to make sure that Americans are safe from every possible or imagined threat, it is now prohibited to mail anything to the USA from Europe or Asia that weighs over 1 Pound (453 Grams).   At first I thought this was a Croatian policy since, well, not to insult Croatia, there are no shortage of rules and regulations here.  Croatians quite like them.  However after continued investigation, visits to all of the major post offices in Zagreb, and a bit of research online, it seems that this is indeed a US based policy brought to us by the masters of inconvenience and “security theater,” the TSA.

Apparently this new policy was enacted in November as a result of the ink cartridge bombs that were shipped via air cargo from Yemen.  Instead of simply banning shipment of ink cartridges from Yemen, the TSA banned shipment of everything weighing over 1 Pound.  Sound ridiculous?  Well, it is.  (Good luck finding this online by the way – the only credible reference, other than blogs, I could find was on the Japan Times: http://search.japantimes.co.jp/cgi-bin/nn20101117a5.html)

This is just one more in a long list of examples of how the TSA is stripping away freedoms under the auspices of improving security.

As a result, my family may never receive these extremely dangerous coffee mugs and candy.  These photos may be all they get.  I have no way of getting them to the USA from here other than carrying them on a plane – which brings up a whole other set of various security hurdles that serve to make flying a serious pain in the ass while only marginally improving security. 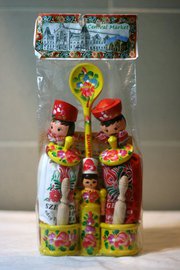 Are we any safer?  That’s debatable.  TSA supporters will say “yes” since there has not been another major terrorist attack on the USA since 9/11.   That is a difficult argument since there were not that many major international terrorist attacks before 9/11 either – so maybe 9/11 was a one off?  In the meantime, the security apparatus has thwarted various other threats, shoe bombers, shampoo bombers, underwear bombers, ink cartridge bombers.  And after each one a new set of regulations was created to stem other similar threats (as if terrorists would be stupid enough to send over another shoe bomber after the first one got busted).  After the shoe bomber, we all had to take off our shoes at the airport.  After the shampoo bombers we could no longer bring liquid containers larger than 3 ounces.  After the underwear bombers we all have to go through “naked scanners” or get felt up.  Now we can’t mail things to the USA from overseas.   Is there a trend here?  Yes, it is that in each case, as with 9/11 itself, the TSA is following the terrorists.  The TSA is not leading.  What does this mean?  It means that they will always be one step behind; that terrorist organizations will continually attempt to find new ways to attack and that the TSA will only know about them after the fact.  And once TSA does become aware of another attack of some kind, successful or not, it will enact another broad set of security measures that will affect the freedom of millions and millions of people.  This is legislation by exception.  Or, put another way:

“They who can give up essential liberty to obtain a little temporary safety, deserve neither liberty nor safety.” – Benjamin Franklin

When all is said and done, the “land of the free” and “home of the brave” will be neither.  The scared of everything, gun-toting masses of America will have ceded every aspect of their freedom in the name of protecting it and achieve neither security nor freedom (what Bennie said).

Think about it.  What’s next?  Terrorists will continue to try to attack the USA.  That is for sure.  They will continually find creative new ways of doing so.  Sometimes we will stop them, other times we won’t.  However, if we continue to regulate ourselves into boxes, surrounded by walls and fences, and ever more rules, our freedoms will erode to nothing; certainly nothing worth defending – and the terrorists will have won.  At this rate, they don’t even have to kill another American.  We are doing it ourselves, if not physically, then metaphysically – we are killing the “spirit of America.”  We are killing freedom.

Shouldn’t I be blaming the terrorists who are attacking us instead of our own security apparatus that is ostensibly trying to protect us?   No doubt terrorists share some of the blame and they really suck.  Again though, if their aim is to instill a feeling of terror or fear, then we are helping them achieve their goals rather than preventing more attacks.  Statistically, being killed in a terrorist attack is about as likely as being struck by lightning.  My question is: What the hell are we doing about lightning?  Certainly not spending $500 billion plus per year to stop it!

I am so angry about this.  I love my country.  I hate my country.  I don’t know what to think.  I am sorry that my family won’t get the presents I bought for them.  Merry Christmas!