Add One of These Budget Knives To Your Kit(s) 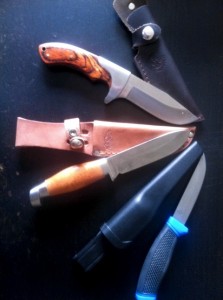 In a short sighted ambitious attempt to think about learning more skills, I wanted, and continue to want to learn how to make a knife out aof a blank piece of steel.  It is something that I have wanted to do for a long time, as does a buddy of mine.  While watching City Survivalist’s and Gavko’s Youtube channels, I became motivated.  I got a little excited and bought a few budget blades I thought I might like to try to make myself.  In hindsight, I should have looked at the process of making the knife before spending money on the blades.  Living in an apartment SERIOUSLY limits what I can and cannot do both with respect to privacy as well as just not having the space to go through all the steps in order to build a solid knife or knives form scratch.

That said, I purchased three knives.  I bought them to evaluate knife design, blade design, thickness as compared to other knives I have, etc.  I pulled out some paper, and started designing a blade and handle for my “perfect knife” and something I thought could be more “urban prepper friendly” in design and ergonomics for suburban and urban preppers.

The first, and the top one on the picture, which may turn out to be my favorite “if” it can hold up under pressure is called a “Timber Wolf Bowie Knife.  The knife itself is 9″ long, full tang, has a 4 1/8″ stainless steel blade a hardwood handle, and a leather sheath.

The Timber Wolf Bowie Knife arrived pretty sharp out of the box.  I sharpened it just a little bit and it was shaving the hair off my arm.  Generally the sign of softer steel sharpening so quickly, The blade is stamped German Steel, slightly harder steel than 440, I believe.  I really like this knife, though.  The handle is ergonomic and comfortable, and the weight of this is good. It has a ribbed spine near the handle for your thumb, which is also pretty comfortable so that you can add additional pressure for your cutting job.  I’m not sure how this will hold up if it is batoned to split some wood, but this spring I will put it to use and report back on it whether I use it hiking, camping, or both.  It is a sub $20.00 knife, and I am pretty impressed with the design, feel, and quality thus far.

The second knife I purchased was a Remington brand Fixed Blade Knife with leather sheath as well.  With a different blade design, this too was a sub $20.00 knife.  At first glance I like this blade design as well.  Comparing it to the Timber Wolf Bowie Knife the Remington brand Fixed Blade Knife is a millimeter or so thinner on the blade, but is slightly longer making it a 4 3/4″ blade.  Like other, it has a wooden handle, sharpened razor sharp, is comfortable in my hand, is also full length tang.  My research also says this is a soft steel.  440, I think, so like previous mentioned was very easily sharpened.  Like the Timber Wolf, it comes with a leather sheath.  This leather sheath is pretty heavy duty and feels well made.  Like mentioned previously, I will put this through the paces in the spring.

Lastly, you may mistake this knife for a Mora.  It is not.  It is a Mora knock off.  In fact, it is named Wahoo Killer Filet Knife.  Do not be fooled.  It is NOT a filet Knife.  It looks like a Mora with the exception that it is not a Scandinavian grind.  It’s a straight edge grind.  It is 1144 Stainless Steel and feels surprisingly like you are holding a Mora Clipper in your hands.  It is as thick and feels as sturdy as a Mora.  The sheath looks and feels just like the Mora as well.  The best part about the  Wahoo Killer Filet Knife is that it is sub $3.00 at $2.59 each at Amazon.com.  I actually purchased several of them and gave them away, put one in my tool box, and others in other kits.  As for sharpness, to be honest, it did not come the sharpest out of the box.  I have made many attempts to put a good edge on this knife, but think the edge that is on it is not the best and not a good angle.  I believe that if you buy this knife you will want to put your own edge on it to get it as sharp as it can be. More work, definitely, but what you can expect from a $3.00 knockoff.   If you have a Mora, you know they come razor sharp when they arrive, and that they are a very hard steel.  Specs on this knife are: 8 1/2 inches overall, hard plastic sheath, textured rubberized handle for a solid grip, and 1144 stainless steel blade.  Don’t be fooled, even though it is a knock off, it seems like a good substitute if you want to buy multiple knives and are on a budget.

That said, as you can read, I have not put these knives through the paces, but I will.  For the prices you may want to add them to one of your kits anyway or put them through the paces yourself.