A Couple of Interesting Conversations on Food Prices on Sunday 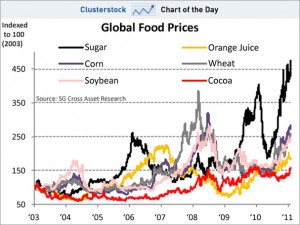 Sunday was an interesting day for me.  I spoke to a friend of mine that lives about 20 minutes outside of Allentown, PA.  He went to the grocery store as he always does on Sunday mornings.  He is a man of routine.  He picked up hes hand basket and proceeded to fill it with the items that he would normally fill his basket with.  As I mentioned, he is a man of routine.  he got to the checkout counter to find that his items were almost $20.00 more expensive this week than the previous week.  As I questioned him, he mentioned that he bought the same quantities and the same brands as he always buys with no deviation from his weekly shopping routine.  This friend of mine is on a budget as well.  His income has dropped due to the economy, and is living paycheck to paycheck.  He is glad he has a job, but is only ever a paycheck or two away from not being able to make it.  We chatted a little more and he felt the need to vent  a bit more as well.  I let him.  People need to vent, however, the conversation turned to, “where else can I cut my budget, Ive already cut 95% of any wasteful spending out.”  I can attest that he has… Food pricing is going to continue to rise as will clothing, etc. very soon.

The second conversation I had was at dinner this evening in NYC with friends I have not seen in about three or four months.  They live in Western NJ, and have a decent size piece of property out there. They are putting in a garden this year, because not unlike my friend above, these friends had a similar situation recently at their local grocery store as well.  They began questioning a couple of other local businesses that have started raising their prices as well.  The response was interesting.  He stated that he got similar answers from everyone he spoke with.  The answer was that the proprietors had not increased their prices over the past couple of years in fear of losing their customers, but now their wholesale costs have gone up so much, they must raise their prices or they may be forced to close their doors because their profit margins have become too thin by eating the costs of doing business.  Interesting.  They followed this conversation up by also stating they are putting in a rather large garden this year, and that they are looking into dehydrating as well as canning vegetables from the garden.  To give you some history, the husband used to half jokingly mock me for discussing any type of preparatory actions in the past.  He is not a hunter, but is now considering doing things to preserve his cash vs. going to the store and spending to eat.  He continued the conversation with his fear that real inflation is coming due to politicians spending and not taking time to work on any real issues.   We discussed some of those in more detail, but I will not get into them here.

The point here is that out of the blue, I had two friends in a 24 hour period that do not know I write this blog, do not know I have preparations of my own, do not know I am preparing for a natural or man made disaster confide in me that they are concerned and are thinking of taking action where they need to for self preservation.  They are in their infancy on their journey’s.  It will be interesting to see if they take their journey’s seriously or if it is rhetoric.