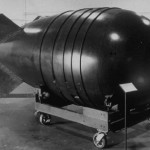 I read the Survival Spot Blog, almost daily.  Partially, because I read through so much stuff, he generally peppers his blog with videos that make for a nice change.  Today, he had a post, entitled “10 Things You Didn’t Know About Survival.”  I think it should be titled “10 Things You Didn’t Know About Nuclear Survival,” but nevertheless I think that it was a good illustration of what people forgot when they were taught to get under their desks in the event of a nuclear missile strike when we were kids in school.

Here it is if you didn’t click on the link above:

When I went through this post, it got me thinking, too…  If a nuclear weapon is detonated in NYC (near where I live), I am far enough away, assuming that the bomb is a smaller one, that I would not be affected directly by the blast.  However, nuclear fallout, on the other hand will travel with the wind stream.  Depending on the size of the blast, would depend on the amount of fallout.  Hmmm.  How good is bugging in going to be?  Well, I’m not going to stick around to find out, honestly.  I’m bugging out, and right quick, in the event a nuclear blast occurs in NYC.  If there is fallout there is radiation.  If there is radiation, that is bad.  Now, how good is bugging out going to be for me?  Well, that is a good question.  Since the jet stream moves counter clockwise, and the air will be moving north/north west, and I am bugging out to the west, how good is bugging out going to be for me in the event of a fallout situation?  That is a good question, and again, depends on the size of the nuclear device’s explosion, was there only one of them, or were multiple locations targeted.  Do I need additional fall back and bug out locations?  Questions that definitely need to be addressed.

Here are a few links on the potential threat of nuclear attack on NYC: