This is What We Are Up Against! 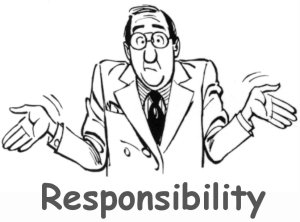 We, as preppers, by definition think ahead about “what if” scenarios. I grant that some people take preparing to unrealistic/unlikely extremes (I highly doubt an alien invasion or a zombie apocalypse for example). And as preppers we generally do think about the well being of others beyond ourselves and our families. If not generosity to others such as sharing of supplies/shelter/protection/etc then at least to the extent that we do not want our actions to harm or have a negative impact on other people. At least I don’t.

But I and we as preppers are far more alone in that thinking than I would have liked to think.

Just before writing this article I had a very troubling conversion with two co-workers.

I went to the lunchroom to get some coffee and overheard two co-workers, co-worker1 and co-worker2, discuss auto repairs. Specifically, co-worker1 said his car was recently in the shop and was told his brakes (and rotors) need to be replaced. Not immediately but within a couple hundred miles at most.

Co-worker2 said he (co-worker1) should continue to drive on the current/old brakes until they start to make noise, then get them replaced. As he explained, co-worker2’s thinking is co-worker1 is going to drive those same couple hundred miles anyway so he may as well do it on the old brakes thus squeezing out the last bit of mileage before starting with new brakes and rotors.

At this point I chimed in.

I pointed out that while the current brakes may still function it is a safety issue. Maybe with new brakes you’re car will stop in 30 feet while on the current/old brakes it takes 45 feet? Or, maybe there’s so much shimmy and vibration in the current/old brakes you have poor steering control if you have to slam on them? Either way, co-worker1 is going to have to spend the money on the new brakes anyway very soon so why take the safety risk?

The response from co-worker2 floored me! He said quote “It’s ok. That’s why there is good insurance. They’ll pay for anything that happens.”

He did not say it with a smile or wink & nod. He was flat serious.

I pointed out that if (Heaven-forbid) co-worker1 got into a serious accident and an investigation uncovered that a mechanic strongly recommended changing the brakes but he didn’t that could be held as a liability against him.

Again, co-worker2 said insurance will cover anything that happens. After all, if the car passes inspection how bad can the brakes really be?

I won’t go into the blow-by-blow play but the discussion went back and forth with me pointing out both the personal liability risks as well as the physical risks, and co-worker2 kept repeating how great insurance is. (Meanwhile, co-worker1 whose car this conversation is about, just watched in silence – I hope my points sunk in on him.)

Why bother actively taking precautions when insurance will pay for anything that happens?
Why be a responsible person for your own sake (and your family’s – co-worker1 is married with children) as well as for those around you?
Insurance solves the problem – someone else will fix things for you.
No biggie.

Yes, insurance will pay for damages and liability.

But isn’t the goal not to need to rely on the insurance?
Isn’t it the mature, adult, responsible thing to take actions to avoid needing to rely on insurance?
Shouldn’t insurance be a last resort and not a tactical decision?

(Footnote: According to Smartmotorist.com a European study of driver behavior showed 80% of drivers involved in accidents say it was the other person’s fault; Only 5% admitted they did something wrong.)

And that says nothing of having to live with yourself if your actions (or in this case, lack of action) result in the injury or death of someone else.

This is what we are up against in the world. Co-worker1’s point of view is most regrettably not unusual or unique. Someone will pay for, clean up, or otherwise take care of us so it doesn’t really matter to take preventive actions.

As preppers we see this all too often. You try to explain to someone the benefits of having some minimal amount of preps (food, water, medicine, etc) on hand and the other person just presumes that if anything bad happens then someone – maybe you since you have the preps! – will take care of them!

I don’t know how to change people’s mind. If you can’t convince someone they have an ethical duty to take action for their own safety and reasonable common safety for those around them then what can be done before something happens?

If someone wants to bury their head in the sand, go for it. Can’t stop someone from being short sighted or in denial. But the blind reliance on someone else to fix their own problems, things they could have taken steps to prevent in the first place, is the truly frightening part.

Self respect is dead.