The Food I Buy Is Changing, a Lot.

It is evident.  My last few trips to the grocery store have yielded what I believe what others have been talking about now for some time.  But to me it is visually noticeable.  I know this because I am a creature of habit.  Being a single guy, I generally purchase the same things over and over again on a regular basis.  For instance, as a sample I will buy some of the following items for both immediate consumption and as preps:

Above are four examples.  These examples are a representation of what I buy.  In each case, because I have purchased and used them so regularly in the past 24+ months, I can visually tell the difference between what I was purchasing a little over a year ago and what I am buying today.  Let me outline for you the difference of what I used to purchase and what I am buying today…

Breakstone’s Cottage Cheese Snack Packs.  While the container size is the same as it was a year ago, the container is no longer full of the cottage cheese curd.  It is filled about 3/4 of the way, and the curd, and the last 1/4 of the way is full of a creamier substance which is still cottage cheese but is clearly a filler and in my opinion obviously cheaper to keep profits the same or higher.  To boot, like everything else, the price has increased in the past year to compensate for rising fuel costs, etc.

Stop and Shop Mixed Vegetables.  While the 16 oz. bag of frozen vegetables has remained the same size, they might as well start calling it “Stop and Shop Corn and Vegetables.”  There has been so much corn added and other vegetables cut back on, I feel like I need to buy individual bags of vegetables and mix my own instead of buying the premixed bag.  The point of more corn, well, corn is cheap, and other vegetables are more expensive to grow and process to the bag.  To increase profits, lower costs, or compensate for rising costs they have augmented the bag with fewer peas, carrots, and green beans.  Sad really, because the nutritional value of the bag has gone down because of it.

Bumblebee Albacore Tuna.  Not unlike the above, I have seen a visual difference in the can of tuna upon opening it.  While it is a 5 oz. can of tuna, there is clearly less tuna in the can and more water.  You still have a five oz. can, but there is clearly less protein in the can.  The price has stayed roughly the same with a slight increase over the past year, but the portion is smaller.

Swanson Canned Chicken.  Swanson was probably the least subtle of the four brands mentioned.  They went from a 5 oz. can to a 4.5 oz. can and the can size is clearly smaller.  They not only decreased the portion size by 1/2 an oz.  but it looks like they decreased the can size as well to save money on packaging.  The price of this product also roughly stayed the same, and the portion size has decreased.

Now in the defense of each brand, it does not feel like they have pulled back on the quality of the food, but have cut back on the portions.  With rising food prices, and frankly the price of everything else going up, food is the last thing I want to see sacrificed.  You still have to eat, and you still need calories to keep going.  Assume that portions continue to shrink and prices remain the same, you may find yourself eating more than the portion size in the can or the bag.  Your food cost has already gone up, and by eating more you have effectively doubled your food costs.

As I write this, I sigh, and think about the TV show on the Travel Channel called The Wild Within.   The host, Steven Rinella is not only an accomplished outdoorsman but a writer who has written for many reputable magazines.  In the show he tries to illustrate where our food really comes from.  It has actually served as a reminder that the grocery store is actually the destination, not where it originates. 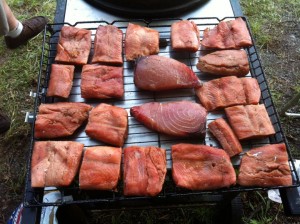 I’m not going to get into the benefits of canning and dehydrating here.  To be honest, I should be doing more of that, and I may in the near future because of where I see food prices going.  This past weekend during my camping trip, my buddy and I smoked some Marlin, Chicken, and Salmon fillets.  I now have a couple pounds of preserved salmon and several pounds of preserved chicken in the freezer.  I can take that out anytime, and it will last for days in the open air, and months in the refrigerator.  This helps to preserve my food cost, as well as make a tasty treat from time to time.  That said, canning is definitely on the agenda in the near future, since  I’ve written about the Suburban Farmers Market in the past…