The Debt Ceiling, The Day After, The Day Of… 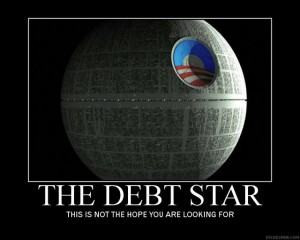 It’s 7:42 a.m. on Tuesday, August 2nd, 2011.  Working from home today, and into my coffee by 3/4 of a cup.  Today is the day our government votes on the debt ceiling.  I have not had much time to research the way I would ultimately like to, however, here is my prediction based on some of my own research.

Now, reaching the debt ceiling today, or let me rephrase, reaching our government’s credit limit today, will not technically shut the government down.  Although, maybe it should.  Maybe it should close and lock the doors and spiral us into a financial oblivion.  This isn’t some romantic “get the existing incumbents out dream.” I know that sounds harsh, but I am not confident that they are going to come up with a good or right solution.  This may need to be done to actually take action on balancing our national budget.  Congress’s borrowing power needs to be limited going forward.  To that end, in the next four hours, if our government decides not to raise the debt ceiling, and cut costs, government may be forced to partially shut down.
Unfortunately, I think there is no right answer for any of us.  There are repercussions for the common person like you and I no matter what decisions they make.  I am just not sure I trust them to make the right decision…
By the time you read this, a vote will have been cast, and we will be speculating about the fate of our nation, financial well being for family, friends, and future. I hope it is positive for all of us.

This video added at the end of the day, post vote

Visit msnbc.com for breaking news, world news, and news about the economy