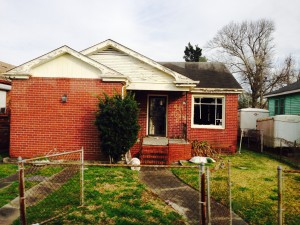 Hey everyone.  This weekend I am in New Orleans for the very first time for a work conference.  I am fortunate enough to have my significant other with me to enjoy the weekend with.  We’re having a good time.  Dinner, & a couple drinks on Bourbon Street, etc.

Yesterday we took a city tour.  It was Jennifer’s idea, and it was a great way to see the city.  I will say a few things about New Orleans:

I am having a hard time describing it because I went from seeing an 8,000,000 dollar mansion to going a few blocks and seeing impoverished homes that were never fully restored from Hurricane Katrina.  In fact, there are still abandon homes, neighborhoods, projects, etc. Many still have the FEMA “badges” painted on the front of the homes telling you  The date the FEMA team entered the home, the condition, if bodies were found etc.  I have to be honest.  It was sobering to see.  The driver, a New Orleans resident, intentionally, (and sure it was part of the tour) took us into these depressed areas illustrating the diverse landscape of New Orleans in only a few blocks from very affluent areas.  He showed us the water stains that were 6 – 15+ feet high in different areas of the city.  These are artifacts that are almost 10 years old that are fossilized in the history of New Orleans.  Reminders of a dramatic SHTF event where thousands lost their lives, homes, and had nothing to come back to after Katrina.

As we were riding down the road in the comfort of our air conditioned bus, we drove by neighborhoods where homes were still gutted, roofs were caving in, etc.  I felt like my heart was sinking.  To boot, these were not homes that looked familiar to me.  Where I come from they looked like a small doublewide trailer that had a door in the front and a door in the rear.  There were people hanging out in front of the homes with roofs collapsing in on the 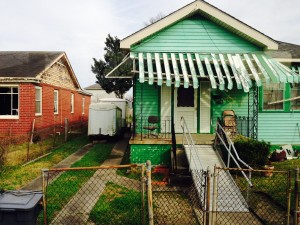 home, and people hanging out around the homes next door, across the street etc.  These are active, impoverished neighborhoods where some homes were restored, and some were not with residents in many or all of them.

This is 10 years later.  This is an area where our Government offered to raise the homes 15′ off the ground on stilts.  Most people did not take advantage of this.  Some did.  The neighborhoods look a little awkward with a one or two homes on stilts. 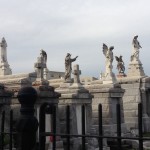 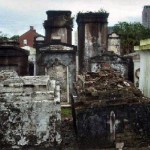 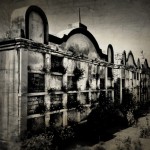 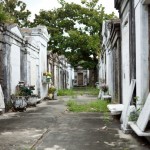 As we kept driving we also drove by cemeteries.  These cemeteries had walls around them that went as high as eight to 10 feet.  The driver explained, at the time, the walls were put up to quarantine those that died of yellow fever from the early 1800’s to the early turn of the 20th century.  Some of the cemeteries were beautiful with beautiful monuments that pay respect to the families that own them.  Other cemeteries looked 100 – 200 years old with their mausoleum like grave sites falling apart, with vegetation growing from the roofs, looked spooky, ugly, and like something out of a horror film.  And, it looked like this during the day.  I can only imagine how it might look at dusk or in the evening.  Which, brings me to the warning from the tour bus driver regarding a person should NOT enter a cemetery alone.  That they should go in groups.   This is because this is where many of New Orleans homeless live, and that more than once those that have gone in, have not come out alive.  In fact, as a side note and somewhat unrelated, as Jennifer and walked down Bourbon street yesterday, there were flyers up for a “missing female adult.”  A bit sobering.  Let’s get back on topic… 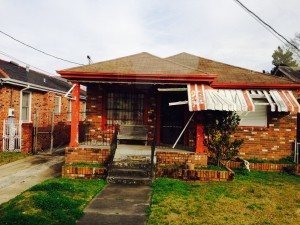 I mention homeless because I am noticing a lot of homeless people in New Orleans.  Many “transient” or maybe not so transient homeless here.  They carry their gear, cloths, and belongings in backpacks, and many of them have dogs.  I took particular notice of the many homeless with dogs.  I am not sure if it is for security, stay warm in the evening, or a love for pets, but many of them are walking around with one or even two dogs.  If any of you know why, I would love to learn.

It has been nine years, roughly, since Hurricane Katrina, and it has been an interesting weekend thus far. I have seen where the wealthy, the poor, the homeless, and more live.  I have gone from multi million dollar neighborhoods to what looks like a depressed war zone within just a few blocks from the wealthier sections of town.  It occurs to me that New Orleans has a dramatic economic landscape intermingled with each other.  So dramatic in fact, abandon homes are only blocks from multi million dollar mansions.

I also learned post Katrina, New Orleans population was about half of what it was prior.  This no doubt also deeply impacted the economic landscape, and continues to do so today, as the population is about two thirds of what it was prior to Katrina.  1,800+ people died in New Orleans during Katrina as well.  A very sad thing.  I couldn’t help but try to make out the number of people/bodies found in the homes on the FEMA markings on the homes.

In closing, sadly, this is an example of a SHTF event which in a decade is still not fully recovered.  With empty homes, apartment buildings, commercial buildings, etc.  New Orleans still has a way to go.  If anyone that reads this blog is a NOLA Prepper, I would love to hear from you and get your thoughts.