Lessons in Preserving Meats and Poultry 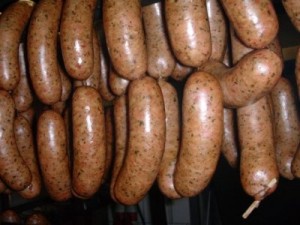 This past labor day weekend, a buddy and I went camping.  Not like real camping, however, in the woods with no facilities, and no one around for miles, but to a piece of property his family owns that he will likely use as a Bug Out Location.  It has a 5th Wheel on it, as well as amenities that you would expect, electric, water, a small septic that will never fill because no one uses the property for most of the year, a stream that runs out back that feeds the reservoir that feeds the NYC water supply, and, yes, even neighbors.  We stayed in tents, and used a porta potty because the 5th Wheel was locked up and winterized already.  It is a pretty nice BOL.  The goal of the weekend was to smoke some venison that needed to have something done with it.

So, my buddy, from NYC, a self proclaimed foodie, decided he wanted to try his hand at making venison chorizo sausage, and regular venison sausage.  So, on our trip to the grocery store (yes, I know it would have been more authentic had we procured the rest of the stuff in the bush) we bought a couple of  bone in chicken breasts, turkey breasts, fresh mozzarella cheese, and another type of cheese that I do not remember the name of at the moment.  We hit up Gander Mountain for some sausage casings to make Slim Jims out of some of the left over venison.  We seasoned and cured it when we got to the camp site.  Not only did we do that, but we made cures for the chicken, fish, and turkey.  Threw everything in the fridge for the recommended times.  We used the Internet to get brining recipes, etc.

Here is what we brought to smoke:

Fast forward to 9:00 p.m. Friday night after hours of preparing everything.  The fish was first out, along with the sausage.  Some of the sausages were pre-made before we got to camp.  i.e.  in the casing and boiled already.  We fired up the smoke with some cherry wood and we were off to the races… We also dropped in the cheese to start that rolling as well…

That was lesson one.

The next day came the turkeys, chicken breasts, and Slim Jims.  We took the turkey and chicken out of the brine they had been in for 18 hours, and let them dry.  We filled the sausage casings with the venison for the Slim Jims, and lit the smoker a couple of hours later to get it warmed up.  Everything went smoothly with the exception of another fire in the smoker.  Not sure why this was happening.  We also had an issue with keeping the smoker consistently hot enough for the turkey and the chicken breasts, but realized it was too hot for the Slim Jims.  So we had to take the Slim Jims out first when they were done, which meant opening the doors of the smoker a few times and letting the heat out.

Before bed, we added a bit more wood to the smoker, and it the hay.  In the morning we had nicely smoked chicken and turkey, with one exception: One of the turkey breasts was not cooked thoroughly.  Good thing we have a grill… We fired up the charcoal this morning, and with some indirect heat and some additional wood chips, we were able to cut the breasts off the bone, and finish them up in the grill… Ad hoc at best,  I know.

In the end, everything came out amazing.  If this were a real bug out scenario, I think I would have also sliced up the turkey after it was smoked, and cold smoked it to help preserve it a bit more, but not dry it out too much.

I am happy with the lessons learned, and I suppose more perfection will come with more time doing it.

What would I like to learn about what we did this weekend:

Next, I think I am going to try my hand at canning some meats.  I have never canned anything, and would be sure to post on that as well.

As for smoking.  I am now addicted since I bought my smoker a bit over a year ago.  Not only is it good to learn for preserving foods, but what an amazingly fun hobby I have found.  Not only can you preserve your food, you can amaze your friends and family not to mention yourself, with the flavors of the food once fully prepared.