Les Stroud, “Will To Live, Dispatches From The Edge Of Survival” 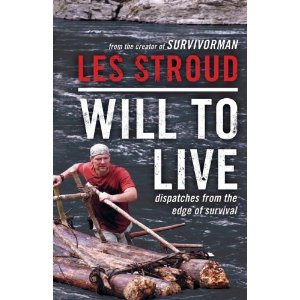 Well, this review comes one day after his new book was released.  I actually had an advance copy of it from the publisher, and struggled to get through it; but not why you might think.  I have been super busy with work and at the end of the day it has just been hard to find the time.  I’ve been carrying the book around with me for weeks reading bits and pieces of it when I can.

When I finally settled into a Starbucks on the east side of Midtown Manhattan with a cup of hot cocoa on a cold Saturday morning, I cracked open the book to the introduction and read,

There will be survival stories to tell.”

Call me simple, but I was immediately hooked and drawn into the book.

In his new book, “WILL TO LIVE, dispatches from the edge of survival,” Les Stroud takes the time to illustrate in detail the adventures around several specific survival situations of those who fell in harm’s way with little or no knowledge of what they were getting into.  He outlines the ordeals (Les’s word for “survival situations”) of the following and more:

The stories in this book are compelling, mesmerizing, and again, drew me in.  Some you will know, as I was familiar with Nando Parado from the 1993 film, and Chris McCandless and “Into The Wild.” Others I was not familiar with, like the Robertson family who were boating around the world and their boat was destroyed in the Pacific Ocean.  Very inspiring, by the way.  A true story or survival.

In my opinion, Les wrote this book so that the stories teach invaluable lessons about how to be sure you should prepare for any personal adventure in your life.  i.e. to make sure you have the practiced skills, motivation, and the resolve to survive in an ordeal you may find yourself.

Peppered throughout the book, Les offers some additional commentary around how to avoid situations like the ones the subjects of the stories are in, what gear you may want to have, what skills you should need, and what some of his experiences were like when filming Survivorman in similar situations.  I liked the additional commentary as it offered additional insight into how one might approach the situation at hand.

This was a good book, and the first one by Les Stroud I have had in my hands.  It is clear that Les is a professional and if you are into wilderness survival in any way, these stories and commentary can only add to what you may already know.  Not to mention the book is entertaining, and moves quickly.

As an additional FYI, for those interested; Les will be at the Barnes & Noble in Clifton, NJ for a book signing on February 8th from 7:00 p.m. – 8:00 p.m.  if you are interested in briefly meeting him.  I would be there, but unfortunately I will be landing in the mid west for a meeting the following day.