The events of October 2012  in the NY/NJ area are well known to the nation.  Hurricane sandy made landfall and wreaked havoc on many towns.  Being one of the most densely populated areas on the planet, the damage was in the billions.  Major parts of the NY and NJ infrastructure were damaged including railways, roads, shipping channels, and power stations.  Most people were caught with their pants down and found themselves out of work, out of food, out of gas, or out in the cold.  New Jersey state government has made some changes to the barrier islands and the building codes along the shore as a result of the damage…. unfortunately, many of the people and their reliance on the nanny state has not changed at all since the storm hit.  Lets take a look at some changes that have been made and see what can be done better to help miminize the catastrophic damage a storm like this can do. 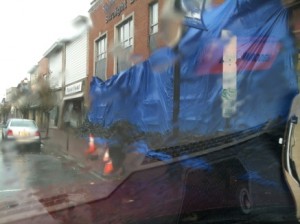 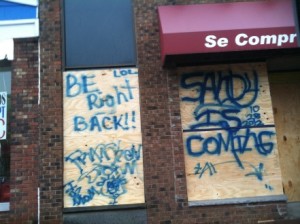 Some people boarded up businesses… 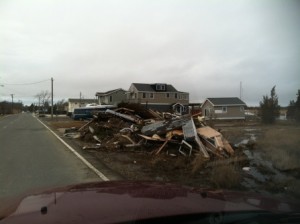 some could do nothing but tear down what was after the storm had passed.

First, protecting property.  Sometimes that could be as simple as moving it.  NJ transit lost a large portion of their trains because someone made the decision to leave them in a terminal in Hoboken, pretty bad idea considering they could have been moved miles away from the coast.  The number of boats destroyed in the storm was amazing… some of them were larger vessels which take time to remove from the water… but many were smaller boats that could have been loaded on trailers and driven miles inland.  While driving through a devestated portion of the state on Route 35 several days after the storm, I saw a 16 foot boston whaler on top of a roof in a low laying section… and countless other small boats stacked up like cordwood in and around marinas. 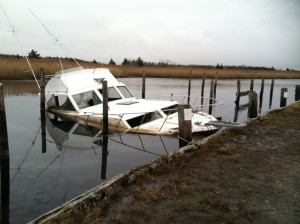 Boats, cars and other property can be moved away from potential storm damage areas. 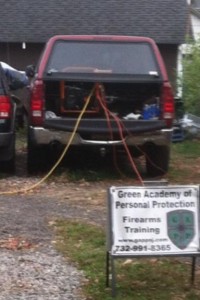 Storing generators and other tools in secure locations is paramount

In addition, many cars were damaged from tidal surge because owners failed to move them to higher ground.  Theft of generators and gas cans became a big problem in some areas… securing items like these doesn’t take much effort of ingenuity.  A heavy duty lock and chain, a job box, or even a locking cap in a truck bed could do the trick.  Some planning on an owners part could have spared them a lot of headache after the fact.

Second, building better/smarter.  Many of the houses that were damaged during Sandy have been condemned or will need to be raised.  Some homes that were built properly to begin with faired the storm pretty well… these homes have “break away” walls in the ground floor (which was used as storage or garages) while the living quarters are several feet above ground, protecting everything valuable.

Some homes have been deemed a total loss… 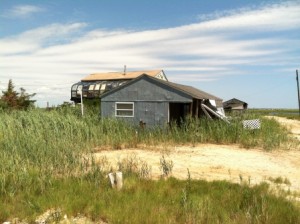 or homeowners have just given up. 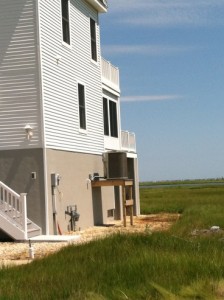 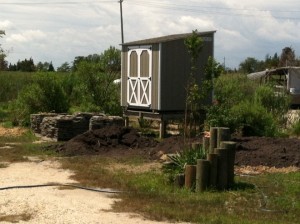 and some property owners have done it on their own.

Most new homes being built in the flooded area will be constructed this way.  Some people have even taken to moving important items such as AC units, washers/dryers, and even yard equipment up several feet as well.  Think about what

Third, store what you can. With the channels into the raritan bay unnavigable, it wasnt long before gas stations started running out of fuel.  Power was out for days (weeks in some areas) and every one with a generator was running it, causing long lines at gas stations for both cars and people with cans.  The gas shortage in the effected area called for gas rationing laws to be instituted. 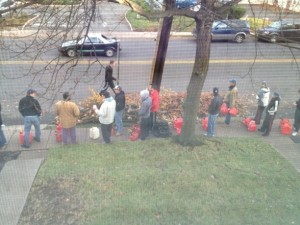 Obtaining gasoline became a chore during the lengthy power outage… 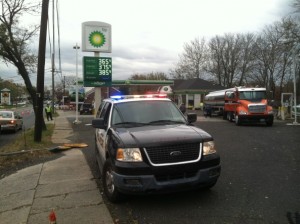 and police were tasked with keeping lines from becoming riots.

People were stealing gasoline from yards, sheds, and even syphoning it from cars… and some filled gas cans were selling for exorbitant prices on ebay and craigslist.  People with gasoline guarded it well and took the opportunity to get more when they could.  Personally I had 50 gallons in cans before the storm and was lucky enough to be in a network of people who took turns running into pennsylvania with pickup trucks full of gas cans to keep everyone re-supplied… so I never went below 35 gallons on hand.  I ran my generator sparingly for the 5 days I was without power… 4 hours in the morning so my daughter could watch cartoons and we could make coffee, and 4 hours in the evening so I could watch the news and heat the house with an electric space heater… the refrigerator and chest freezer were alternated to keep things cold.  By not drawing too much power for my house, I was able to give power to 3 of my neighbors so they could watch tv, charge cell phones, and a few other odds and ends… all off of a 6500 watt generator.   Using the power sparingly was the key… and it allowed us to ration fuel for an extended period of time (I found I burned through about 5 gallons per day).  In addition to gas, food was in short supply (trucks couldnt move due to damaged roads and lack of fuel)… having a good supply was important.  I took the opportunity to introduce my daughter to MRE’s… she actually liked them, but the whole experience was a novelty to her and the joys of in home camping probably soon would have worn off… thats where the good supply of candy and other comfort foods comes in.  I never ran out of milk but in case I needed it, we have a good supply of dehydrated milk, baby formula, etc in our food storage.  Our chickens kept producing eggs as well.    Sadly when I talk to people, many still dont have more than a few days food in their home.

Fourth, tools tools tools.  There was more than one person in my neighborhood whos home was damaged due to falling trees or heavy wind.  These homes sat exposed to the elements because the owner had no power to cut wood to board up a window, or cut a tree branch up and tarp the roof.  As mentioned before my generator was invaluable for me and my neighbors….but there were a few other things I found useful (and almost necessities).  Cordless, rechargable tools are a must for a scenario like this.  The Ryobi 18v series is fantastic… it has just about any tool you could need or imagine (circular saw, reciprocating saw, angle grinder, sander, drills, impact drill, etc).  I have a few basic tools I could use in an emergency and many, many batteries that rotate through the chargers regularly.

Keeping tools stored, lubricated and ready to go are incredibly important.  Staging them in a bugout vehicle before an impending storm is equally important. 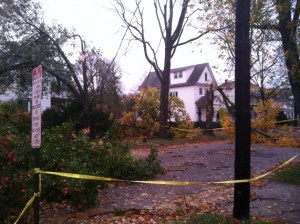 You never know when you could need a chainsaw or sawzall.

hainsaws are invaluable as well… I helped my neighbor remove a tree limb from his power line before any serious damage could be done.  I also moved two down trees from in front of my house that were blocking my escape (side note on this: my actions pissed of the OEM workers that were putting up barricades nearby, I was told to stop but ignored them because they couldnt give me a good reason why, I explained after I was done that if I needed to get out for an emergency the trees were blocking my escape, they were still irate and threatened to have me arrested.   I wasn’t arrested… moral of the story, do what you need to do to protect yourself and your family… even if the authorities disagree).  You should also consider a shovel, hand saw, tarps, ax, etc.  If you live in an apartment, you may be thinking you have no need for that sort of thing… but what if youre driving on a once flooded road and the mud that you thought was an inch deep is actually a foot?  What if you have a tree branch blocking your parking garage exit?  Small fold up items that fit in a trunk can be invaluable in times like these.  Sadly, shortly after the storm, craigslist was full of lightly used generators… owners pretty much discarding them after the storm banking on the fact they would never need them again.

Hurricane Sandy was a life lesson for many… and the lesson was they were unprepared. From the preceding paragraphs, you can see what others did, have done, and what can be done better.  But the question remains, what have you done in the last few years to better your situation?  Whether you were hit by sandy or not, a great deal can be learned from it.  There are steps you can take and items you should have on hand for any emergency… after all, its not just hurricanes that can be a problem.