The Official Warning from Department of Homeland Security, 6 Months or More Without Critical Utilities 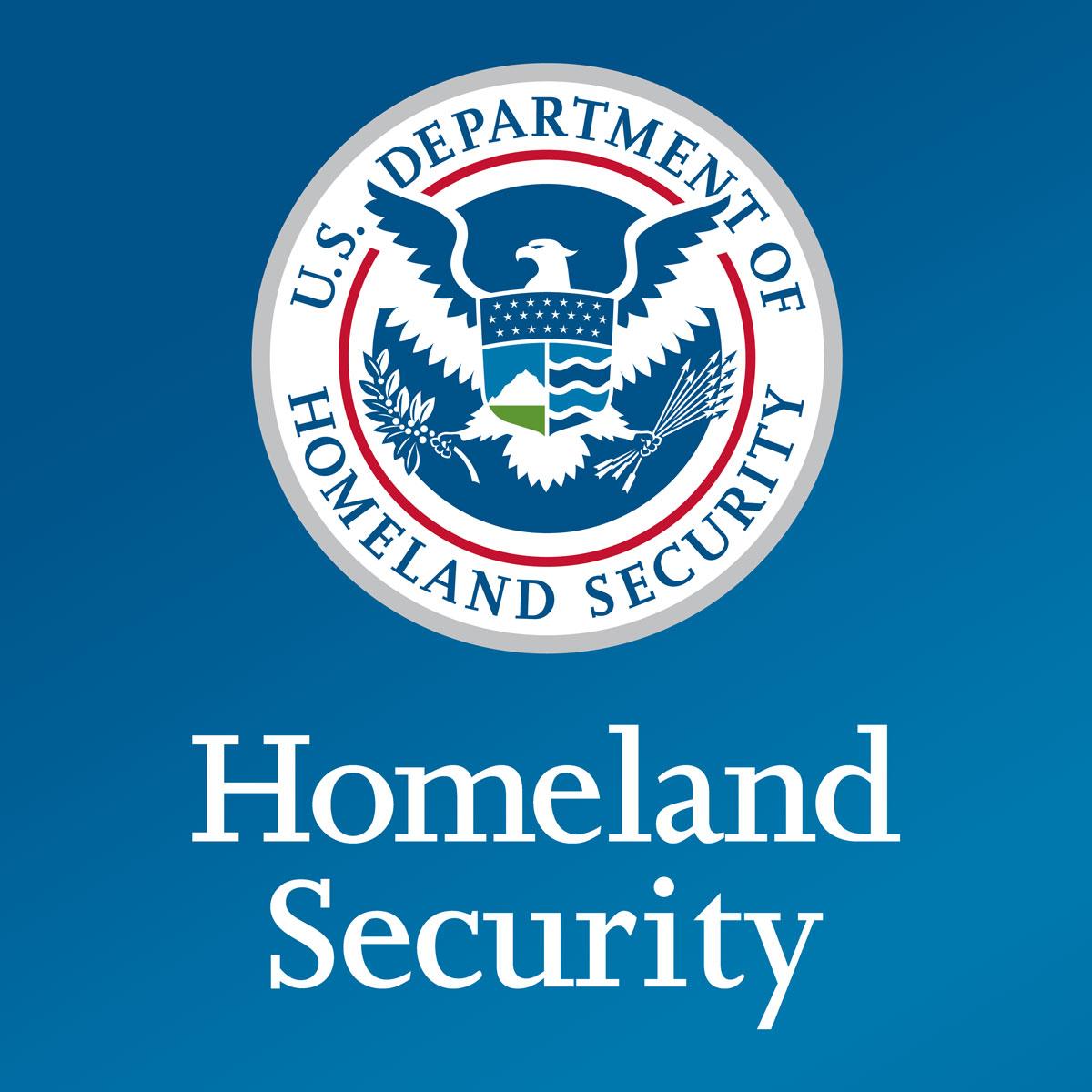 Well, it’s finally happened, and you’ve probably already heard about it…  The United States Government has officially, on paper, to the public said that our electrical grid, water supply, gas supply, and much more are in dire jeopardy of failing if our electrical grid is taken out by a natural or manmade disaster.

If you are unaware of this report, on December 10th, 2018, the Department of Homeland Security put out a 95-page report (You can click this link to review it in more detail).  If you’re a prepper and not heard about this, you’ve been out int he bush too long.  If you’ve heard about it, and done nothing over the past three weeks, shame on you.  This is probably the single most important report published to the public by the US Government in several years.

Since the release of this report, the prepper blogsphere, prepper YouTuber’s. and prepper Podcasters have gone nuts reporting on this report.  I read the report twice, and let it sink in a bit prior to writing about it.  I really want to focus on a few items that hit me, as I sat and read it again this morning.

Come with me on a brief journey to examine the report a bit closer so we can both speculate and examine the issue(s) at hand.

In May of 2018, the office of the President commissioned a study on “the nation’s ability to respond to and recover from a catastrophic power outage of a magnitude beyond modern experience.” That was a pretty bold statement unto itself, and one typically you’d only hear used in pre/post-apocalyptic movies in the most recent few years.  Admitting this risk requires a national focus is understandable and concerning at the same time.  We’ll look at why shortly.

The goal of the United States governmental bodies involved in this report is to “provide a path forward for enhancing the nation’s capabilities. These actions require a whole-of-nation approach and strong public-private collaboration.”  This makes sense at first glance because I think as observant preppers we saw Hurricane Katrina become a shit show, as the government, however well-intentioned was not close to being ready to help in the capacity they felt required to help.  There were a lot of lessons learned for sure, and you can see (observe) the improvements with every major natural disaster since from a distance.  Many of these natural disasters are called out in the report: 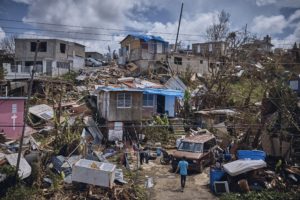 A man walk as pieces of houses are seen along the hill during the aftermath of Hurricane Maria on Sept. 28, 2017 in San Isidro, Puerto Rico. Puerto Rico experienced widespread damage including most of the electrical, gas and water grid as well as agriculture after Hurricane Maria, a category 4 hurricane, passed through. (Photo: Andres Kudacki)

So, during this study, what else was identified that might need improvement, and considered very concerning today in the event of both a man-made or natural grid down event?

First, they looked at the potential consequences of a grid down scenario.  They also call out that there will be an unprecedented amount of interdepartmental/agency cooperation required across the agencies required to bring the grid back up, mitigate future risk, work with the public, blah, blah, blah.  They go on to say they’ve learned they need a federal to local approach as all disasters are local.  They are not wrong.  It’s the boots on the ground that are already here, that will help to best coordinate the best response for the local populations in their appropriate geographies.

The introduction to this document actually starts on page five (5) after a series of definitions and some commentary on the warning itself.  But, it’s not really until page 13 that the report cites that “There needs to be more individual accountability for preparedness.”  This turns out to be a bit of foreshadowing into additional commentary later on how long to prepare for and what to prepare for.  Additionally, on the same page, it should be noted that the government is still looking at malls, stadiums, etc as infrastructure for emergency camps, without any deep description of potential services to be offered, other than a statement that these facilities may need to be upgraded.  I would draw a parallel to the local bank in a small town that doubled as a nuclear fallout shelter.  Really, what services will they be able to provide, and in what timeframe?

Where it gets interesting is on page 14, where the report says,

People no longer keep enough essentials within their homes, reducing their ability to sustain themselves during an extended, prolonged outage. We need to improve individual preparedness.

This is after a number of paragraphs about how fuel will be critical in bringing up the grid once repaired, which is concerning unto itself, since in some cases fuel will be hard to come by, even for the power companies which will be repairing the grid.

By page 15, DHS admits to a series of strategic coals, the first of which will be:

I applaud them for thinking of this, but as you can see from the two sets of callout’s that they’re realistically only calling out up to 14 days of food & water for a prolonged disaster.  More on this shortly. 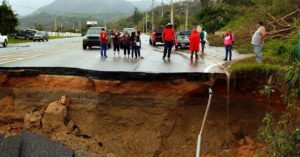 The meat and potatoes for prepper types hit on page 65, where DHS goes to discuss how all disasters national, or otherwise are “local” in nature, and that ultimately federal authorities will coordinate with state and local officials to disseminate information and resources to the citizen.  To add additional credibility to what DHS is putting out there to the public, they discuss Katrina, Peurto Rico, Superstorm Sandy, and the lessons learned, not only with the tactical boots on the ground, but at the individual untilites levels as well.

What you already know from the blogsphere, twittersphere, YouTube, etc, is that DHS is saying that people should be prepared to survive off-grid for at least two months with as long as six months without power. Think about this for a moment.  Six months.  What does this mean?  This means that (as we all know) in 48 – 72 hours all the food on the shelves in the grocery stores will be gone.  Within a week those that were completely unprepared will be on the prowl for their next meal.  Operational security aside, this is ridiculously concerning.  I personally saw this during Hurricane Sandy in NJ.  Those from other neighborhoods had started pushing out into their neighbors’ streets inside of the first four days of the power outage.  Security started to become paramount.  The report only mentions ‘once’ that the grid down could last for years depending on the event that brought it down (page 5).

That said, while we know this event may or will happen eventually, DHS continues saying the following:

As part of the scoping effort, the NIAC defined catastrophic power outages as events beyond modern experience that exhaust or exceed mutual aid capabilities. The NIAC built on that definition to provide additional detail and clarity:

Talk about disconcerting.  EXCEEDS OR EXHAUSTS CAPABILITIES OF EXISTING MUTUAL ADI PROGRAMS AND EMERGENCY RESPONSE PLANS… You know what that means, don’t you?  My guess is after a few months (two to three), you’re on your own…  You’ll be on your own anyway, as I see it, as my assumption is they’ll want you to be housed in a facility of their choice to receive aid from the government.  Remember those stadiums, etc mentioned earlier… Have you all read “One Second After?” If you haven’t you should.  It’s a primer (as I see it) for what could happen in a grid down scenario.  Not to mention it’s a great book, and entertaining at that.

I discussed the DHS report with Mrs. Prepper.  Upon discussion, I got the feeling after she digested the initial discussion that she believes we would be in a “shelter in” situation.  I am not so sure.  I want to give humanity the benefit of the doubt, but afraid that humanity is too fickle to mind their own business.  Operational Security prior to grid down day one needs to be established and tested.  Sheltering in for even two weeks would require round the clock watch and hardening of areas of the home I have not begun to address yet.

The DHS document (Click here to read it) is 95 pages long.  It’s actually a quite easy read.  I read it twice so that I could ensure I didn’t miss anything.  I urge you to read it.  Unlike One Second After, it is not entertaining.  It is enlightening.  The most important thing I think a citizen can take from this report is the following:  Food, water, power, communications, hygiene, and transportation supply chains will be disrupted.  Security will be required, and I have not even begun to get into what the roads, and infrastructure will look like when everyone stops their car or runs out of gas trying to get to their next destination, especially if you don’t bug out early.  But that is the age-old question, right.  To bug in, or to bug out?  Only you know the answer.