Car Broken Into In Front Of My Place, a Mini SHTF for Somebody 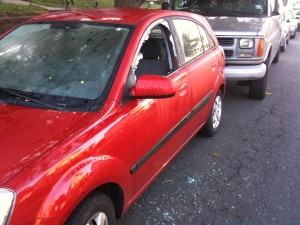 Living in the suburbs can be tedious at times.  I don’t have a driveway, which means I have to part on the street.  Which means that a minimum of twice a week sometime three, I am moving my car first thing in the morning for alternate side street cleaning rules.  A personal pain in the ass if you ask me, but I live with it, and the occasional parking ticket because I just plain forgot to move the car, or didn’t get there before the police officer did with his trusty pad and pen.

This morning I went outside to move my car, get a coffee, and bagel.  Upon my return as I was driving by looking for spots to park to avoid a ticket i saw a compact car in front of my place with a busted window.   I have seen the car here for the past couple weeks, so assuming that it is someone who just moved to the area.  Plates are from Georgia.  First thought, “that sucks.”  Second thought, “oh, shit, that’s right in front of my place (actually within 30 feet).   I thought, “Shit, here it comes, now it’s only a matter of time before someone busts in my window for some over priced piece of electronics I accidentally leave on the seat.”  Or worse, watch me as I unload my rifles and ammo from the trunk of my SUV coming home from the range after a couple hours of shooting (if this has not happened already).  That would be much worse.  Who needs their place broken into and their guns stolen?  Ugh.

Too say the least, my alertness levels are up a notch.  My eyes are scanning the street every time I go outside now, and I am trying to make mental note of who is not from the neighborhood every time I see someone new walking by…

At some early time of the morning before the sun came up, I did hear a crash or thud, or something, because I had my bedroom window open to let the cool air in last night.  I just rolled over and went back to sleep.  Might have been the perpetrators.

So, what is this beginning to confirm for me.  Pardon the possible degrading remarks, however, I have been noticing the element starting to degrade in the neighborhood.  i.e. more punks, more rough looking individuals during the day, people up milling around the streets all hours of the night (literally).  I know what you might be thinking.  I know that you cannot judge people by how they look.  I get that.  But, I cannot deny the plausibility that things are getting worse in my little neighborhood.  There are other signs as well.  One of the guys, I call him the neighborhood slumlord because he drives up in his “slick 10 year old BMW, owns the crappiest looking rental on the street, and is always looking at renting places he can barely rent out in his place.  How do I know this?  Years ago when I was looking in this area for an apartment I looked at his place.  It was horrible.  And he wanted an arm and a leg every month for the rent.  Another sign is when I go out onto my back deck which is on the second floor of the house I am in, I can overlook several back yards.  In one of the homes, there are renters that have been there about seven or eight months that are loud, obnoxious, etc.  Pardon the expression, but trashy.  I am no elitist.  Trust me.  But the collective picture I am getting and vibe from the neighborhood is not a good one at the moment.  As I mentioned, it is getting worse.

What to do about it?  Money is tight at the moment, as it is for many others, which may be why so many people are out and restless making their presence known to others.  I really would like to find another neighborhood, or a better place to live if this persists, but I like my deck on the back of my apartment, and I really do not want to sacrifice a couple of the amenities that I am afforded.  One of which is my proximity to the airport.  Some of you may not think 15 – 20 minutes from a major airport is an amenity, but when you do a lot of traveling for business it is an amenity.  Especially after a long week of travel, I do not want to drive an hour to get home when I get back from a long trip.

So, what to do.  Money is tight for me.  I am working on a couple of projects, but want to save the extra money I am earning, not spend it on a new place or other stuff.  I have not been able to save money in a couple of years, so it is nice to get a few dollars back in the bank, “just in case.” To boot, I still have a little debt I am paying off, and an IRS audit that I had to content with a year ago, and now the state wants their share of that money.  Time to hire a tax attorney…  What a pain in the you know where.  But more on that later.

It is only a matter of time before the crime in my neighborhood gets any worse.