And Then There Was a Dinner Meeting 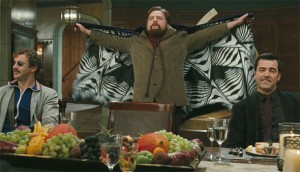 Last week, I had dinner with three other preppers.  One was new, and the two others I have been in touch with for some time.  We all live in Northern NJ, and are concerned with the economy, job growth, Bugging In, Bugging Out, etc.  The conversation twisted and turned in many directions.  We talked about forming a group, buying property, where to buy property, who is looking at property for a Bug Out Location (BOL), what the cost of the property is, the likelihood of actually being able to make it to that property either on foot or via vehicle, etc.  We discussed who had kids, the inevitable bug out / bugging in conversation, how to do both, what some of our individual bug in and bug out plans are, etc.  One of the guys is growing his own wheat, and is just planting his winter wheat as we speak.  He also explained how he is grinding his own wheat into flour, and learning to bake, etc…

The new guy, a Dentist, is also an avid prepper, gun owner who is actively taking classes and tactical courses, was looking to connect with several other like minded people.  He was a friend of one of the other guys at the table.  He turned out to be a pretty open and nice guy, and I look forward to chatting with him again soon.  Not to mention I have been looking for a new dentist.

With Occupy Wall Street starting to get stressed, violence is surely around the corner.  That said, everything we spoke about is speculation.  But one thing was material, which was the fact that OWS is a current and present issue for potential issues to ignite going forward.

Another item that came up was the pulling of troops from Iraq by the end of the year and this letter my friend received about his kids school, and emergency drills that are happening every couple weeks.  Check this out:

Two of each of the following school security drills are required during the school year.

Lock down – implemented when someone or something in the building may cause harm.

Bomb threat – implemented when a bomb is suspected on the premises.

Evacuation – implemented when a hazard is suspected in the building.

Active Shooter – implemented when someone has intent to cause physical harm with a weapon.

Two additional drills are needed and can be on any of the above mentioned or:

We have been advised to make our announcements for these emergencies consistent and simple. Therefore, when we practice a lockdown an announcement will be made saying, “This is a lockdown.” We will be practicing these drills throughout the year. The children are prepared for these drills by the teachers. The terms might be alarming but this is the directive from the State.

Please discuss with your child the need to practice and be prepared for all emergencies. Please contact me with any questions or concerns.

This prompted a couple of questions,

Maybe a little tin foil hat, but it was still a topic of conversation.
Communications came up, and was a heavy topic of conversation. I preface the rest of this topic with the fact that we are not an organized prepper group, just a few concerned citizens that have prepping in common.  That said, we are all investigating HAM, CB, and other communications methods.  We decided two things:
I recently bought a Midland Handheld CB, a magnetic whip antenna and one of the other guys suggested a particular HAM Radio Unit as well.  We also decided to start meeting every couple weeks, so I am assuming that the group will want to start testing communications as we can.  Unfortunately, I have not taken my HAM license seriously enough and have not studied for it yet.  However, I think now that there is some external motivation, I may get on top of it…

The result was a good meeting and dinner, and I look forward to getting together with these guys again in the next couple of weeks…