2012 Urban Garden in Review, by an Anonymous Contibutor

It was a great year!

By comparison to last year and before our urban garden did very well. I credit a lot of our success to trial&error over the last several years, learning as we go, reading and researching why this or that happened etc.

Before going into details some background is needed:

We live on Long Island, NY about 40 miles East of Manhattan. In times past such a location would have been considered “suburban” but not anymore. While not the row houses of Brooklyn or Queens it isn’t the wide open spaces either. Most homes are on less than a quarter acre including yard. So finding room to grow vegetables or any meaningful quantity is a challenge. Especially without digging up the entire backyard leaving no place for the kids to play, have a BBQ etc. And of course I have to deal with the little lady who isn’t at all onboard with my prepping unfortunately (but s-l-o-w-l-y accepting a little of it).

A few years ago we started vegetable gardening  in a couple of small planter boxes and a few containers. Did good with most herbs and OK with some pre-sprouted veggies like tomatoes and peppers. Over the years we added more containers and a greater variety. Some did better than others.

This year I finally got the Miss’s to agree to putting in large planting bed. We researched several designs but in the end the simplest (and cheapest) way was just to section off a part of the yard we don’t use with a wall of double rowed cinder blocks. Not elegant but very functional. Then filled in the box with some gravel (for drainage) and a mix of top soil and mulch. I also had the automatic sprinklers modified to cover the bed when they come on (in addition to my own watering when needed). This, combined with over a dozen more plastic planting pots gave an incredible amount of farmable area. 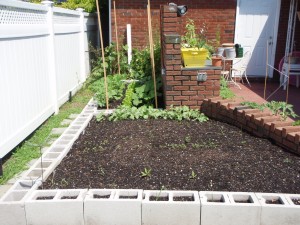 We took full advantage of the space and planted a HUGE variety of things.

We also tried some berry bushes and even a Meyer lemon tree, though these will take at least another season to produce fruit.

Some of these for real use and a few just as a test to see if it would grow and produce a yield.

The following is a summary review of how things went.

Most of our vegetables did well so I’m only going to highlight those I think were of special interest or noteworthy:

My wife – G-d Bless Her! Even though she is far from onboard with my prepping she embraced this garden totally. She set up a system of numbering the pots, containers and bed rows. She kept both a written log and a spreadsheet log listing what we planted, when it was planted, when we first saw sprouts, and weighs and records how much we harvest from each vegetable.  This will help a LOT next year to figure out what we did well and what we need to try again or improve on. 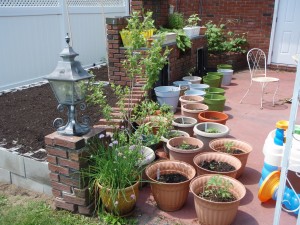 Tomatoes – We had an incredible (in our opinion at least) tomato harvest! The plum and cherry tomatoes produced huge yields! And sweet as can be! The yellow tomatoes were also good while the Roma just didn’t get as big as we hoped but still did OK.

Last year we had a big problem with “end rot”. Lost a lot of good tomatoes to it. Researching it we found it’s caused by lack of minerals in the soil, especially calcium, and over watering (I’m guilty of that). So over winter we saved our egg shells (use a well sealed container – they can stink even when washed!) and when we planted the tomatoes we added a few crushed to the soil (we also read that adding some crushed Tums tables has the same benefit – Tums is mostly sea shell calcium).

The egg shells helped a lot! Along with not watering as heavily. We did get some loss from end rot but not nearly as bad as last year.

Radishes – Our first crop was in just a plastic planter tray. Did very well. The rest were in the planting bed and did even better.

Radishes are very undervalued in gardening in my opinion. They aren’t a “sexy” vegetable to brag about but they do grow fast (about 30 days), even indoors, and you can have multiple harvests in a season. Plus the greens are tasty too.

Patty Pans – They look like flying saucer or a kid’s toy top but are very tasty and grew well. My wife enjoyed those. They grew like any other squash. Will definitely do them again next year.

Cucumbers – A banner year for them! We had over 10 pounds of them. Very tasty. They didn’t have the hard rind skin like from the supermarket. Would also be great for making pickle slices.

Sun Flowers– After a slow start they just took off like a rocket! Big yellow heads and lots of seeds. We tried drying some in the food dehydrator. Did better slow drying in the oven. It was fun to grow them and will do it again next year.

Herbs – We always do well with most herbs especially the basil, sage and chives. Easily dried for winter use. We didn’t do any lemon verbena this year. Couldn’t find seeds for them, only sprouts so we passed. But those do well too when we have grown it. I’ve read that making tea out of the leaves is good to sooth an upset stomach.

The Bad (and lessons learned)

Planting – We tried starting sprouts in the house before the planting season. It was a real pain! We learned we need to be ready to put the sprouts into the ground quickly. And since weather in our area early season can be uncertain we lost many batches before we could plant them. Don’t know if we’ll try sprouts again next year instead of just going straight to ground planting.

Potting – We planted 3 seeds in each pot (in a row so we can better tell if it’s a sprout or a weed). We thought we’d be lucky if 1 or 2 sprouted. Instead in almost every pot all 3 sprouted! Took a lot of time and extra pots to separate the plants. And some we didn’t bother separating. Next year we’ll only do 2 seeds per pot.

Weeding – It’s a lot of work! But well worth it I think. After an initial wave of weeds early in the season the planting bed we pretty weed free. We don’t use herbicides so any I saw had to be plucked by hand. Not easy reaching to the center of the bed either!

Celery – It just wouldn’t grow! Tried several times before I finally got sprouts in the bed and by then the season was winding down (celery need 90-110 days to fully grow). It was very hard determining a celery sprout from a weed. May have plucked some by accident. Don’t know if we’ll try again next year.

Leeks – Like the celery they didn’t do so well. We got sprouts but most didn’t grow so big. Not sure why. May use the space next year for something else.

Garlic – We tried planting cloves in the cinder block cells. Most sprouted pretty quickly but didn’t last and by the end of the season had all faded. Not sure why. It would have been fun to get garlic. Not sure if we’ll try again next year.

Squash and lettuce planting – We put the lettuce between two rows of the squashes in the planting bed. Big mistake.

First, as the front row of squash grew it became harder and harder to reach over to get to the lettuce.

Second, eventually the squashes over grew the lettuce and it (the lettuce) was a lost crop.

Also, squash being a climbing plant, needs a better trellis system. We tried a mesh “net” style strung between some dowels. Wasn’t strong enough. Next year I’ll put in a few pieces of cheap plastic trellis.

My wife’s logs will help a lot! Other than the celery and leeks just about everything did good if not excellent.

In addition to replanting out “core” vegetables I’d like to add a pear tree. My wife isn’t keen on it since it will need to go in the ground and she doesn’t want it to over grow the yard in time. But I think it’s worth a try.

I hope the berry plants and lemon tree do well. I’m also thinking of trying a lime tree.

I’d also like to try growing a few tobacco plants. I don’t smoke but a few in some pots would be an interesting experiment. I know tobacco is grown successfully in Pennsylvania so on Long Island should be good too. I presume the leaves can be dried out easily. Have to research it. The seeds can be purchased online, though not cheap. If this works out it could be a barter item in a post-disaster scenario.